First report: The newest model on our fleet is off to a good start – bar one minor headache! 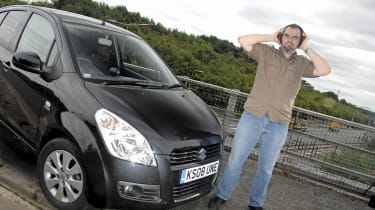 My hearing is taking a pounding! Now, my work colleagues would place the blame directly on my love of all things rock, but the sound I’ve been exposed to isn’t music to my ears.

You see, I’ve been charged with finding out if a modern city car can take the strain of a lengthy commute. And my test companion is the most recent addition to our long-term fleet: a Suzuki Splash.

I live in Chelmsford, Essex, and my 90-mile round-trip to Auto Express’s office in central London takes in a variety of roads. However, to get from the twisting country lanes near my home to the bumpy streets of the capital, there is one major hurdle I have to overcome: the motorway.

And while the Splash has proven capable in most situations, it’s the cabin din at 70mph that really lets it down. There’s a huge amount of wind and road noise that easily drowns out the stereo, and having a conversation can be tricky. You really notice the lack of noise proofing when passing through tunnels, which suggests that Suzuki has skimped on sound deadening material throughout the cabin.

That’s a shame, because the interior is cleverly designed. There’s a lofty driving position which provides a commanding SUV-style view of the road, and everything feels well built. From the big buttons on the stereo to the multifunction controls on the steering wheel, there’s not much to dislike up front. The indicators operate with an annoying beep, and some of the plastics are quite hard, but overall the Splash is comfortable and roomy.

The same can’t be said for the rear. While passengers in the back have plenty of headroom thanks to the tall roofline, leg space could be better. Manual windows are another sign of cost cutting.

Leave the motorway and the Suzuki is a lot of fun. Its soft suspension absorbs all but the worst urban bumps. Although that does mean there’s also plenty of body roll in corners, the Splash still feels very sure-footed, and the standard-fit electronic stability control is a reassuring safety feature.

The 1.3-litre diesel engine is sourced from Fiat and, thanks to the car’s 1,160kg kerbweight, it doesn’t have to work too hard to keep the Suzuki moving. The five-speed gearbox is a touch vague when cold, but once warmed up it’s easy to keep the motor on song and stay with other traffic.

One of the biggest highlights of Splash ownership is the minimal impact it has on your wallet. So far, the city car’s economy has been fantastic. The readout on the trip meter rose above 50mpg when it started to cover longer trips, and it has stayed there ever since. Our own calculations back this up, with a return of 50.0mpg on my typical commute.

If I want to keep feeling those benefits, it looks as though I’ll have to keep my ear defenders on for a while longer!

Second opinion I really enjoyed the economy and comfort of the Splash, but after a few trips I spotted a potential problem with the interior layout. The high-mounted gearlever is great to use, as it is within easy reach of the steering wheel. However, tall drivers like me will find that their left leg rubs uncomfortably against the deep centre console – I’m still nursing the bruise days after driving it. And something which intrigues me: does a car this small really need parking sensors? I suspect not.