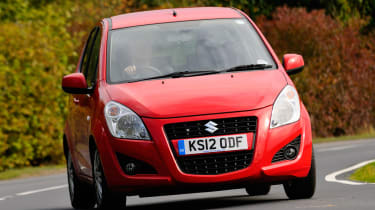 The Suzuki Splash and its sister car, the Vauxhall Agila, are both characterised by their high rooflines. The reason behind that styling is to boost practicality, and it does work. There's decent head and legroom for all passengers, though bootspace is a disappointing 178 litres. In terms of styling, interior quality and driving experience the Splash has begun to be outshone by newer models like the Volkswagen up!. And when you consider that the up! is more than £1,000 cheaper than the Splash, it starts to look a little overpriced, too.

The Suzuki Splash comes with either a three-cylinder 1.0-litre petrol or a 1.2-litre four-cylinder engine. The former struggles to get the Splash moving and never offers a feeling of urgency, even with the throttle pushed all the way to the floor. This low-powered engine, producing just 68bhp, claims a 0-62mph time of 14.7 seconds, while the more powerful 93bhp 1.2-litre unit manages the same sprint in a more reasonable 12.0 seconds. The suspension isn't particularly good at soaking up rough roads, so it can be a little uncomfortable. The handling is geared towards easy city driving so you'll find light steering and a tight turning circle among its merits. It's not very fun to drive at speed, though.

Running a small car generally means small bills and that's certainly the case with the Splash, although there are other cars out there that are cheaper to run. Insurance costs will be amongst the cheapest on the road and the fuel bills wont be too large either, thanks to fuel economy of 60.1mpg in the 1.0-litre car. Road tax is in the second cheapest bracket thanks to low CO2 emissions of 109g/km, too.

The Splash is one of those cars that doesn't really move you either way. It's not particularly ugly but nor is it particularly striking. It's a tall and inoffensive supermini. However it's unlikely to turn heads as much as stylish rivals like the Fiat 500, Skoda Citigo or Volkswagen up!. The interior is disappointing, too, as it's a bit dull and cheap in places.

The Splash hides its tall 1.6m height well. The benefits of the upright design are found inside, with wide-opening doors revealing extremely generous passenger space. The 178-litre boot isn't great and you'll struggle to fit more than a couple of weekend bags. However, the rear seats do fold 60:40 for a maximum space of 573 litres. It’s a shame that awkward windscreen pillars and thick C-pillars restrict visibility.

As with a lot of small cars, the Splash didn't manage to score the full five stars in the Euro NCAP crash safety test. Instead it has to make do with four, but ABS and driver, passenger and side airbags come as standard. Stability control is only available on the top-of-the-range SZ4 model, as are curtain airbags. Suzuki finished a disappointing 26th overall in the 2012 Driver Power reliability survey. That said, every Splash comes with a three-year, 60,000-mile warranty. 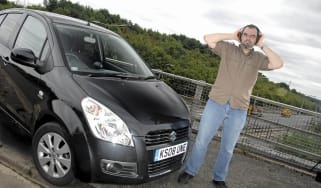 First report: The newest model on our fleet is off to a good start – bar one minor headache!
Suzuki Splash 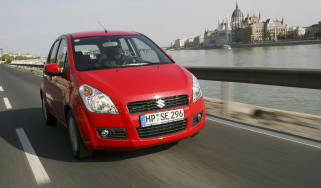 Why dip your toe in the water when you can make a Splash?
Skip to HeaderSkip to Content