The cheeky Vauxhall Agila is the smallest model in the Vauxhall line-up, and promises to be cheap to buy and run 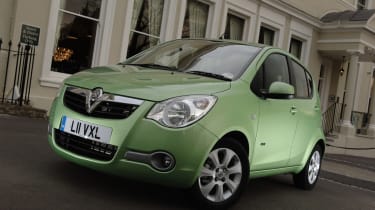 Developed in partnership with Suzuki, the Vauxhall Agila is an eye-catching addition to the city car sector. A five-door hatchback body and surprisingly spacious interior make the Vauxhall a practical choice, while dinky exterior dimensions and a sharp chassis mean it’s a nimble and confidence-inspiring urban runaround. Buyers can choose from two petrol engines – a 1.0-litre three-cylinder and larger 1.2-litre four-cylinder engine. Entry-level versions are sparsely equipped, while its Suzuki Splash cousin boasts more kit and lower prices.

Thanks to its Suzuki underpinnings, the Vauxhall Agila is an engaging and entertaining companion. Best of the bunch is the sweet-revving 93bhp 1.2-litre petrol, which delivers zesty performance via a slick five-speed manual gearbox. The smaller 1.0-litre three-cylinder unit has a characterful, thrummy soundtrack, but feels breathless when worked hard. Compact dimensions, accurate steering and decent grip mean all versions of the Agila are fun and engaging to drive, while the supple ride soaks up the worst bumps. But the Agila is at its best on crowded city streets, where its light controls and excellent visibility allow you to squeeze into the smallest gaps.

You’d expect a city car to be cheap to run – and the Agila doesn’t disappoint. The entry level 1.0-litre machine isn’t as clean and efficient as the similarly priced Hyundai i10, but a fuel return of 60.1mpg and CO2 emissions of 109g/km help to minimise costs. Go for the punchier 1.2-litre and you’ll have to live with higher fuel consumption of 55.4mpg and a CO2 figure of 118g/km. Still, the relatively simple mechanicals should mean cheap servicing, even though the 10,000-mile maintenance intervals result in more frequent trips to the dealer. In fact, the only downside is the Suzuki Splash is cheaper and better equipped.

As with its boxy and upright predecessor, the Vauxhall Agila looks more like a mini-MPV than city car rivals Fiat Panda and Hyundai i10. With its rakish nose, bold headlamps and upright tail lights, the Agila stands out from the crowd. Expression, S and SE models are available, with the latter identified by its 15-inch alloy wheels. The interior is attractive with neat details, such as the pod-mounted rev counter and colourful dashboard and door trim inserts. However, while build quality is good, the hard plastics used throughout the cabin look and feel cheap. You’ll also need the range-topping SE if you want air-con and a leather-wrapped steering wheel.

It’s clear that a lot of thought has been put into the cabin of the Agila. As with the Fiat Panda, there’s enough space to comfortably accommodate four adults, while lifting the tailgate reveals a useful 225-litre luggage compartment. What’s more, S and SE models get a 60/40 split-fold rear bench, plus an extra 35 litres of capacity below a handy false boot floor. Elsewhere you’ll discover plenty of interior storage for family odds and ends. There’s a lidded cubby on top of the dash, decently sized door pockets and holders for everything from bottles to sunglasses.

The Vauxhall has never undergone the tough Euro NCAP crash test, but Suzuki Splash on which it is based scored a respectable four-star result. All models benefit from four airbags, while the rear bench features a trio of three-point seatbelts. Go for an S or SE and you’ll also get a passenger airbag cut out switch, meaning you can carry a baby seat up front. Sadly, ESP is an expensive option on all versions. At least there are few concerns about reliability. The Agila has only been subject to one recall since 2008, while the tough Japanese underpinnings should withstand years of hard work without fault. 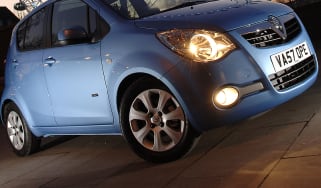 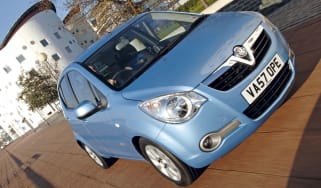 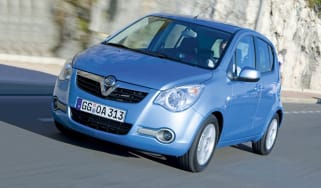 We've already been impressed by the Suzuki Splash. Can Vauxhall improve on the package?
Skip to HeaderSkip to Content