Why dip your toe in the water when you can make a Splash? 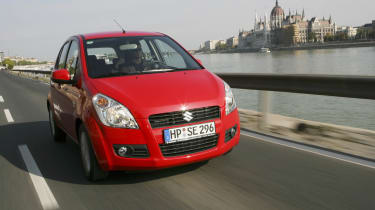 With its rather small boot and less-than-flexible seating arrangement, the Splash doesn’t quite live up to Suzuki’s claim that it’s a mini-MPV. And a few  More yen spent on the interior plastics would not have gone amiss. Those two criticisms aside, however, this is definitely a marked improvement over the Wagon R+. In a competitive market, the newcomer is an impressive and likeable little car that’s well designed, engineered and built – at a good price.

That’s what Suzuki will be asking when it dives into the UK with a new mini-MPV.

Developed alongside the Vauxhall Agila, the Splash couldn’t be more different from its slow-selling predecessor, the Wagon R+. But the newcomer’s radical look and spacious cabin promise to propel Suzuki to new heights. So just how good is it?

The firm says it’s called the car Splash because it wants to convey a sense of freshness. The angled rear lamps are designed to look like splashes of water, apparently! You might need to squint to spot that first time around, but this is certainly a friendly and fun little car. It appears upmarket as well, with a hint of junior Mercedes A-Class in the side profile.

Inside, things have moved on from the Wagon R+, too, although not by as much as we had hoped. The dashboard plastics aren’t bad, but the hard door trim coverings feel very brittle.

The centre control panel is nicely designed, however, and everything is solidly screwed together. The gearlever sits high on the dash, Honda Jazz style, and the front seats give lots of side support, although the driver’s is too high, even at its lowest setting.

And, while the steering alters for rake, it doesn’t do so by much. Happily, there is plenty of leg and foot room all round, and four tall adults can travel in reasonable comfort. Cabin storage is good, with the rear seats splitting 60/40 and folding completely flat. There is additional stowage under the main boot floor.

On the road, the Splash doesn’t feel as sporty as Suzuki’s Swift, with which it shares its chassis. There’s quite a bit more body roll and, with the softer suspension, the steering would benefit from more feedback.

However, the car is stable at speed as well as easy to park and manoeuvre around town. The ride, meanwhile, is composed over ruts and potholes. Under the bonnet, engine choices comprise 63bhp 1.2-litre petrol or 74bhp 1.5 diesel units.

The Agila will also be fitted with a three-cylinder 1.0 petrol, but Suzuki has yet to decide if it will offer that motor in the Splash in this country. The sprightly 1.2 coped well with three adults and a load of luggage. With the four-speed automatic gearbox the engine can whine, but the standard five-speed manual makes smooth, slick changes.

While the oil-burner is noisier, it has better mid-range punch. And it’s expected to be more economical than the 50.4mpg petrol, although the latter is likely to be the bigger seller of the two. The exact spec of the three trim levels has not been confirmed and nor have prices. But they seem set to start at £7,000, with the flagship diesel costing £9,000.

However, if you are expecting a genuine mini-MPV with versatile seat- ing and a decent boot, you’ll be disappointed. On the other hand, for a small car with good interior space and a bit of character, the Splash makes the right waves.

RIVAL: FIAT PANDA The little Fiat shares many of the Swift’s characteristics – it’s surprisingly spacious, plus fun to look at and to drive. And while the cabin isn’t lavish, it’s well screwed together. Prices start at £6,995.