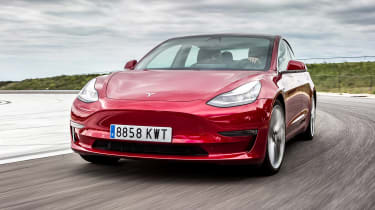 Tesla has begun to roll out what it terms a ‘beta’ version of its ‘Full Self-Driving’ technology to a few select customers in America.

The limited release of the software and hardware brings with it several warnings, however, including that the system “may do the wrong thing at the worst time”, and therefore drivers must ‘keep your hands on the wheel and pay extra attention to the road”.

Despite these caveats, and the inclusion of the word ‘beta’ to indicate the technology is still in development, Tesla still refers to it as ‘Full Self-Driving’, or FSD.

The naming of driver assistance systems has come under close scrutiny recently, with Euro NCAP now assessing how systems such as adaptive cruise control and lane-keep assistance are marketed to customers. Earlier this year, ‘Autopilot’ -Tesla’s name for its versions of these systems - was deemed “especially misleading” by NCAP board member Matthew Avery.

Car makers, Governments, transport and safety groups have been unpicking the problems posed by driver-assistance technology for some years. Safety bodies are adamant that any systems that require drivers to monitor the road environment and oversee a car’s operation are merely ‘assistive’, and should not be named or marketed in a manner that could lead drivers to believe the car is capable of driving itself.

A photograph shared on Twitter by one of the select few trialling Tesla’s FSD technology shows what appears to be a Tesla screen. This warns that although the FSD system “will make lane changes off highway, select forks to follow your navigation route, navigate around other vehicles and objects, and make left and right turns’, drivers “must not become complacent” and should “be prepared to act immediately, especially around blind corners, crossings, intersections, and in narrow driving situations.”

Tesla CEO Elon Musk has not explained how or why a technology - even one in limited beta-mode release - that requires drivers to pay constant attention to the road is classed as ‘full self-driving’ system, though he promised its roll out would be “extremely slow and cautious, as it should.” He followed that up, however, with news that from Monday 26 November the FSD option would increase in cost by around $2,000 (£1,524) in the US.