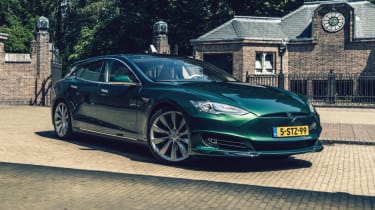 London design house Niels van Roij Design has teamed up with Dutch coachbuilders RemetzCar to produce a limited run of 20 Tesla Model S Shooting Brakes, with the cars rebadged as the RemetzCar Model SB. The conversion, which takes around five months to complete and costs around £80,000, was commissioned by Floris de Raadt, a Dutch car enthusiast with a penchant for rare estates.

RemetzCar, which specialises in the stretching of everyday cars (the firm previously built hearse variants of the Tesla Model S and a Fiat 500) is based in Amsterdam and was tasked with bringing Niels van Roij’s designs to life.

Speaking about the Shooting Brake design, Niels van Roij said: “Based on extensive design research, we developed the brand DNA for the Shooting Brake.” The design team claim to have spent over 600 hours sketching potential ideas, before settling on one named Bold Chrome. As can be seen from the images, the name of the final treatment links nicely to both the sweeping chrome trims around the rear window and the panoramic roof.

What’s more, while the extra luggage space is invariably more practical, Floris de Raadt explained that styling was more important,  “The idea was to translate my Tesla Model S into a dynamic and sporty yet elegant Shooting Brake, rather than creating a car with maximum luggage space.” 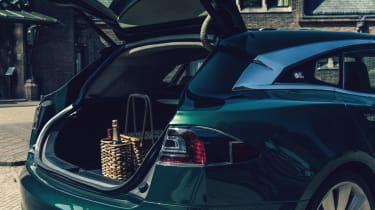 Other design features include a rear spoiler, which hides the rear wiper and the full length panoramic roof mentioned above. Inside, there are RemetzCar logos along with a cream, green and black colour scheme to compliment the exterior, on top of a handful of ‘Easter eggs’ such as the rearview mirror and lined glove box, which have been colour matched to the exterior.

As RemetzCars has not altered the electronics of the Model S, Tesla’s factory warranty is still valid and the bespoke bodywork is covered by warranty of the Dutch coachbuilder. Once more, the changes in structure are said to have had a negligible effect on mass (and therefore range) and actually improved the vehicle’s torsional stiffness.

Tesla's market capitalisation of $81.39bn sees it surpass Ford’s record from 1999, now worth nearly as much as Ford and GM combined
Tesla Model S Plaid confirmed for 2021 market launch