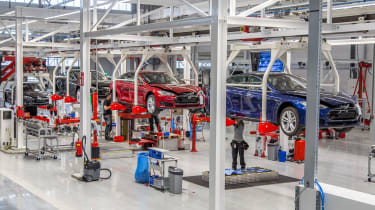 Tesla CEO Elon Musk has opened the doors to his company’s first European factory in Tilburg in the Netherlands.

• One billion miles: Tesla Model S road trip  The new 77,648 square meter facility in the south of the country near the Belgian border will be assembling Tesla Model S cars destined for the UK and the rest of Europe. It’ll improve waiting times for new orders with up to 450 cars per week likely to be made there.

The factory is the first in Europe to include an indoor test track, measuring 750 meters in length. It’ll be used to simulate different road surfaces as part of the quality control process checking noise, vibration and harshness levels. Tesla’s autonomous driving Autopilot systems will also be checked on the track before the cars are sent to their new owners.

• Tesla Model S vs Audi RS7 & Alpina XD3  Although the cars won’t be manufactured in Tilburg, the battery pack, power train and rear axle will be installed there, coming from the firm’s HQ in Fremont, California. The car’s first firmware upload will also be carried out on site, before each car undergoes a rigorous quality control assessment. 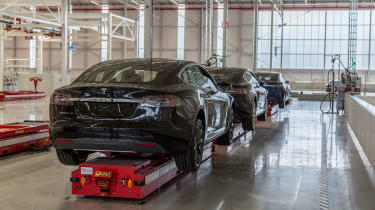 All versions of the Model S will be built in Tilburg from the entry-level £49,500 70D to the £85,200 P90D with its ‘Ludicrous’ mode offering a 0-60mph time of 2.8 seconds and extended range. The upcoming Model X SUV will also be built in Tilburg. First deliveries of US cars take place this month, although UK deliveries won’t be made until this time next year.