As Tesla reached a CO2 emission-saving milestone, we drove a Model S to Amsterdam to mark the occasion 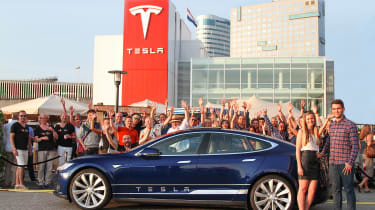 US-based Tesla Motors first appeared in 2008 with an all-electric sports car based on the Lotus Elise, the Tesla Roadster. The brand sold more than 2,250 in 31 countries before taking it off sale in 2011, and while only a few made it to the UK, it was among the first electric cars to offer a usable range of up to 200 miles.

Today, however, the company is barely recognisable. It now employs more than 6,000 people worldwide and has delivered almost 75,000 all-electric cars since the introduction of its market-storming Model S in 2012.

It’s with those near-75,000 cars that Tesla owners have just clocked up over one billion full-electric miles – that’s the equivalent of 4,000 trips to the moon, or 40,000 orbits of the Earth. And Tesla claims its cars have saved half-a-million tonnes’ worth of CO2 emissions in the process. 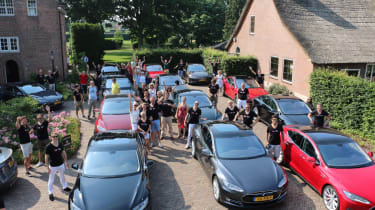 To celebrate, we joined 15 British Model S owners and their families on Tesla’s annual Supercharger rally – driving from London to Amsterdam on nothing but electricity.

Somehow, I managed to convince my girlfriend Anna to join me for the 700-mile round trip, and our first rendezvous point was Tesla’s most south-easterly UK Supercharger at the Hilton Hotel in Maidstone, Kent.

The Supercharger network is a rapidly expanding set-up of fast chargers that allows Tesla owners to top up from empty to 50 per cent in just 20 minutes. There are currently 22 stations and 68 plugs across Britain, with more planned to be installed in the not-too-distant future.

Filling up before we crossed the English Channel allowed us all to start with a full charge – and the range read-out on our four-wheel-drive Model S P85D showed nearly 250 miles thanks to its powerful 85kWh battery. 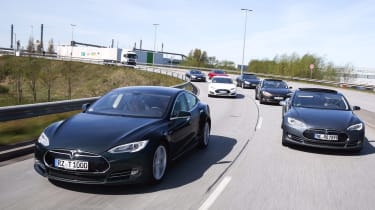 From the hotel, we headed south to the port of Folkestone in Kent, before jumping on the tunnel to France. Our journey was, of course, dictated by available charge locations, but Tesla has cleverly positioned these along popular routes and at convenient rest areas just metres from main motorways and trunk roads.

Despite the fact we’d programmed Tesla’s Amsterdam HQ into the 17-inch touchscreen, the system always directs you to necessary Superchargers to ensure you have enough juice to reach your destination. As a result, we were advised to stop in Ghent, Belgium, for 30 minutes in order to reach Holland without any range anxiety.

Yet charging is so easy and convenient that range anxiety wasn’t an issue. When you arrive, you park the car, push a button on the dash and plug it in. An app on your phone tells you how much power is being transferred, and you can even set the air-con to any temperature for when you get back in. After grabbing a coffee and a comfort break, you’ve used up nearly 20 minutes without even thinking about it, and not spent a penny on fuel – Tesla top-ups at Supercharger stations are free. 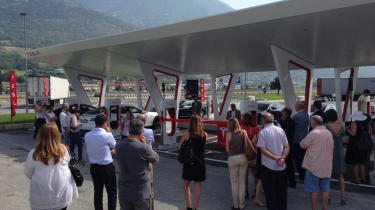 Granted, it isn’t as quick as topping up with petrol or diesel, but you soon get used to it – and with very little preparation or planning, it quickly slots into your routine.

While sitting at the Supercharger stop, you can watch owners come and go – some staying for no more than 10 minutes. Even a quick burst of charge can dispense just enough power to see you through the day, or at least, to your next charge point, whether at home or in the office.

At one stop, we were confronted by an enthusiastic Dane who wanted to take a look at our car – it was the first right-hand-drive Model S he’d ever seen.

But it’s the wide variety of owners that makes Tesla so unique. Chatting to the men and women who have made the leap in recent months was fascinating.

When we finally reached Amsterdam, there was a huge party at Tesla HQ, with people coming from all four corners of Europe – from the UK to France, Norway and Italy. 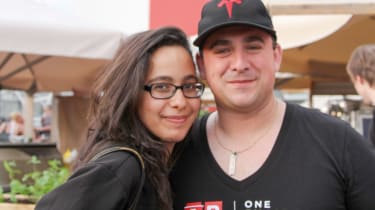 One man, the CEO of DrivElectic, Richard Raphael-Dubos, is making a business out of driving his Tesla. He told us: “I went to the Paris Motor Show last year to look at the new Ford Mustang, but fell in love with the Tesla.”

His company now uses the electric saloon to chauffeur wealthy individuals across the French capital, while also offering short and long-term loans – allowing people to sample electric life without any enduring commitment.

“I have four Tesla Model S cars at the moment, but I want to buy between 30 and 100 of them in the next three years and expand the business across France.”

Others, meanwhile, have traded in gas-guzzling executive cars to live with a Tesla every day. Perry Lloyd, chief executive of a community development business in London, ditched his BMW 640d Gran Coupé just last month after living with his Model S for around a year. 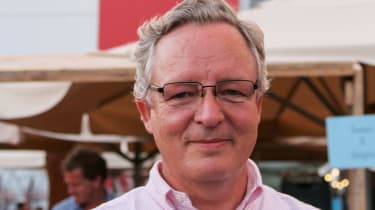 It was interesting to learn how few owners actually bought their car for its environmental benefits. Most are enthralled by the technology or the entrepreneurial spirit of owner, Elon Musk, rather than the fact that they’re contributing to a sizeable drop in carbon dioxide emissions.

Still, we did chat to one gentleman from Norway who loved the fact his car was so clean. Birger Kollstrand (below, far left), a businessman living in Arendal, told us: “For me, it was the environmental side of things. I think it’s important to have a car that doesn’t pollute the environment.” 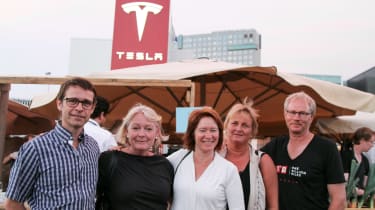 “I used to drive a Ford Mondeo, but the Tesla offers so many environmental and tax benefits. Back home in Norway, driving an electric car means that you don’t pay any VAT, parking is free wherever you go, you can use bus lanes and you’re exempt from all toll road charges. I’ll never buy a petrol or diesel car ever again – it just wouldn’t make sense to do so,” he added.

Whether or not a Tesla – or any all-electric car for that matter – fits your lifestyle will depend on a variety of factors. But there’s no denying that the Supercharger network is revolutionary and genuinely changing people’s perceptions of what a modern car can offer.