The Tesla P85D is the ultimate sleeper for the traffic light grand prix. It delivers instant acceleration like a supercar, yet it does it in such a way that other motorists will be taken by surprise. It’s undeniably impressive, but unless you simply must have  the fastest model in the range,  it doesn’t really add anything  else over the standard car to  justify its hefty price premium.

If the standard four-wheel-drive Tesla Model S 85D isn’t fast enough for you, Tesla has the answer in the shape of the P85D. The P stands for Performance, and the main difference between the cars, aside from a £16,000 price hike, is the addition of a larger 470bhp electric motor to the back axle, giving the P85D total power of 691bhp. 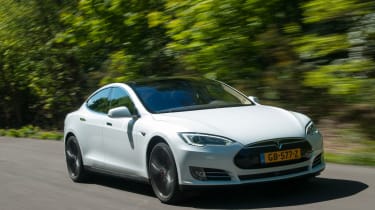 The end result is a claimed 0-60mph time of 3.1 seconds, which is fast enough to rival the likes of the Porsche 911 Turbo S and Lamborghini Huracán. And to help you achieve maximum acceleration, Tesla has given the car two driving modes – Sport and Insane – with the latter delivering maximum power from a standstill.

Yet while supercars provide plenty of noise and fury with their acceleration, the most appealing aspect of the P85D’s performance is how little drama is involved. All you do is floor the accelerator, and it launches without noise or fuss. 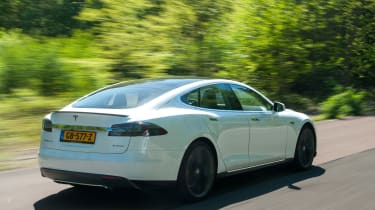 It’s helped no end by the four-wheel-drive system. Like the standard car, there’s no physical link between the two axles for torque distribution, but power is divided 32:68 front to rear, so there’s no problem with traction off the line. And because the Model S looks so unassuming, the acceleration can easily take unknowing passengers by surprise. As for the rest of the driving experience, the P85D is largely the same as the standard car, so while it’s rapid in a straight line, it feels rather heavy and inert in corners, with not much steering feedback and plenty of body roll.

Choose the Performance model, and in standard guise it looks identical to the 85D, save for red-painted brake calipers and a subtle P85D badge on the bootlid. This arguably makes it the ultimate Q-car, but Tesla does offer a number of sporty options. 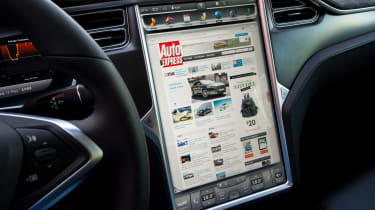 The car in our pictures had grey 21-inch Turbine alloys (£3,800), and while they’re big, they don’t affect the ride too badly when you add the £2,100 air-suspension. There’s also a carbon fibre boot lip spoiler (£850), while the cabin can be upgraded with carbon fibre for the dash, doors and storage tray between the front seats (£850).