Is the entry-level Tesla Model S 75D the pick of the electric exec range? We find out... 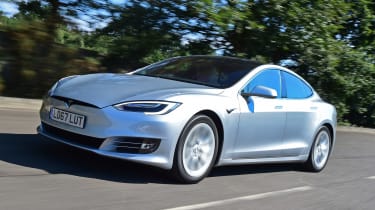 The Tesla Model S remains one of the most convincing EVs you can buy, and this entry-level 75D model is certainly the pick of the line-up. It has nearly as much range as its significantly more expensive siblings, is almost as fast and keeps all the best attributes of the Model S intact: its incredible infotainment, spacious interior and near-silent running gear.

For anyone interested in electric cars, Tesla is just about the biggest talking point at the moment. The company has been grabbing headlines around the world, in part thanks to its non-conformist CEO Elon Musk.

But if you’re actually going to buy a premium electric car, the Model S is bound to be on your list of options. It was among the first crop of EVs that genuinely appealed to mainstream buyers, and remains one of the best choices at the higher end of the market. So how does this 75D entry model fare?

Most of the attention falls on the flagship P100D model, which is one of the fastest-accelerating cars you can buy. But at £123,050, its supercar-shaming abilities are diminished given that it costs as much as a McLaren. 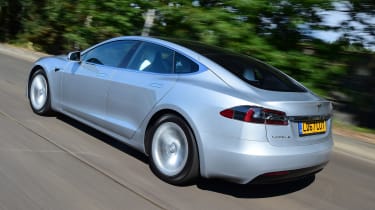 With a range of 304 miles (NEDC), it’s easily capable of supporting the average commute with only a couple of charges per week. And that sort of mileage allows users to travel all over the country, too.

It’s still one of the longest ranges of any EV on sale and adds to the Tesla’s appeal. But it’s not even that much slower than the P100D, if acceleration is your thing. It sprints from 0-60mph in 4.2 seconds, which is quicker than almost anything on the road. The instant torque from the motor gives startling low-speed punch, too.

The Model S’s steering is well weighted but devoid of feel, and while grip and body control are good there’s not much fun to be had beyond its powerful acceleration. It’s just too heavy to feel like you can throw it into corners, and seems much more at home being driven in a more relaxed manner. A Jaguar I-Pace is more entertaining.

The hefty kerbweight and large wheels mean the Tesla shudders over bumps and potholes, but high-speed refinement and comfort on the motorway are very good. Yet small road imperfections tend to cause trim rattles and creaks, which is hard to accept given the high price. Build quality in general falls short of virtually any other car at this level. 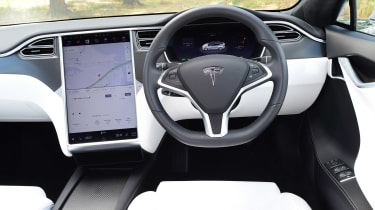 There are a few small issues with the interior design, the main one being a desperate lack of buttons that makes using in-car functions on the touchscreen while driving a frustrating affair. The dashboard and centre console look very modern, particularly thanks to the huge portrait display. The screen and interface are probably the best of any car on sale today; they look and behave like a modern phone or tablet, where most brands’ systems are behind current smartphone tech. It’s just a shame the Tesla’s sat-nav map seems to take forever to load.

Still, there are so many features and useful online services that it’s hard not to be impressed. Plus, the buttons on the steering wheel can directly access things like the radio and climate control, making them easier to use on the move.

The seats are very comfortable, and the interior is spacious. Back seat head and legroom is generous, even for adults.