Is the new Jaguar I-Pace the best electric car on sale? We drive it in the UK for the first time to find out 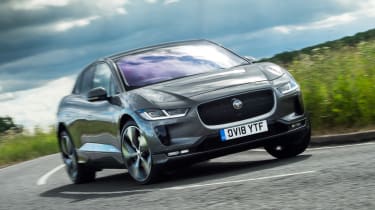 We meant it when we said it: the Jaguar I-Pace is the best electric car on sale today. Its blend of abilities is unmatched in the premium SUV class; the silent, sharp dynamics, beautifully built cabin and rock bottom running costs are just a small part of the car’s unrivalled appeal. The future is here, and it’s very exciting indeed.

When we first tried the all-new Jaguar I-Pace in Portugal last month, we declared it “the best electric car on sale”. But as with any brand-new model, our definitive verdict always hinges on our first drive on UK roads.

Less than four weeks later and we’ve got Jaguar’s first electric car on British tarmac – in fully laden First Edition trim. There’s only one ‘engine’ to choose from at the moment: the 396bhp 90kWh EV400, which offers a 298-mile range (WLTP) in around 12 hours from a 7kW home charger.

On our UK road route, that predicted electric range stayed relatively true – even after several miles of sustained high speed driving and numerous full throttle starts. As a family SUV, many buyers will be looking to use an I-Pace as their only vehicle, so it’s good to know the quoted mileage isn’t wildly unrealistic. 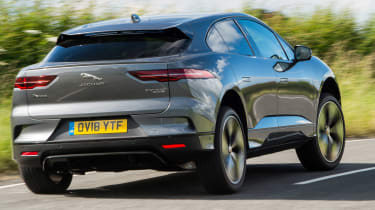 There’s plenty of head and legroom in the back – even on cars with the panoramic roof – and the 656-litre boot (seats up) puts the I-Pace on par with an Audi Q5 size-wise. There’s not much room under the boot floor, however, so you’ll need to factor the bulky charge cables into your equation when loading up with luggage. There are loads of bins and cubbies inside, though, as well as 27 litres of free space under the bonnet.

But Jaguar reckons many buyers will opt for the entry-level I-Pace S, and aside from the dowdy 18-inch wheels, it represents an excellent entry-point into the EV range. All cars get a Meridian stereo and Navigation Pro with a 4G WiFi hotspot, as well as front sports seats and two-zone climate control. With a few choice options, it’s our pick of the range.

On the road, it’s clear just how many miles Jaguar’s engineers have covered testing the new I-Pace on the pitted roads around its HQ in Gaydon, Warks. While there’s an undeniably firm edge to the ride, even on our car’s huge wheels the EV drives well. That stiffer side translates to excellent body control, too, showing the Tesla a thing or two when it comes to ride and handling.

The steering is sharp, and gives the I-Pace the same Jaguar DNA as its E-Pace and F-Pace siblings. No, it’s not as fast as a Model X in a straight line, but grip is excellent, and the low centre of gravity endows the new SUV with a sense of agility missing in many rivals. Aside from the fabricated powertrain sound, in fact, it’s an immensely satisfying car to drive. 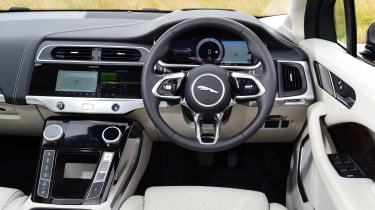 But that satisfaction extends further than a quick B-road blast. The regenerative braking set-up means that 90 per cent of the time you can drive the I-Pace without touching the brakes at all. It’s an incredibly intuitive system; progressively slowing the car to halt as soon as you lift off the accelerator. It’s situation dependent, of course, and switches to a less aggressive setting at motorway speeds.

We weren’t able to take our UK test car off-road, but previous experience on the Portuguese launch rotation proved the I-Pace was capable here, too. The standard-fit all-wheel drive system, Low Traction Launch function and All Surface Progress Control (ASPC) made it easy to navigate rough ground at a controlled and safe pace. It’s no Range Rover, but the clever technology means it’s more adept than most when the going gets tough.

Elsewhere, it’s clear that cabin quality is worthy of the lofty list price, raising the bar over other models in Jag’s current range, too. There’s still no Apple CarPlay or Android Auto connectivity, but the slick infotainment system is packed with functionality and it’s easy enough to operate – even if it’s easy to get lost in some of the deeper sub-menus. The dual-screen set-up sees the climate control settings integrated in the lower display, but the big rotary dials mean changing the temperature is quick and easy.