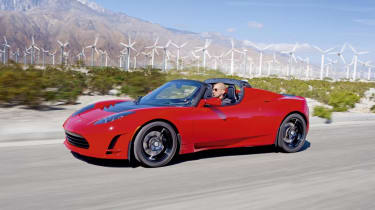 With perhaps the most advanced battery pack of any electric car on sale, and a driving experience that proves lacking an engine doesn’t mean missing out on fun, the Tesla is a desirable machine. This latest car is better than ever, with solid build quality and useful additions such as the adaptive suspension. It’s still enormously expensive, though, and has a very short range.

IT’S update time for the battery-powered Tesla Roadster, and Auto Express has tested the range-topping Sport 2.5 model, which has received a host of upgrades to make it better to drive and easier to live with.

The first thing you notice is the fresh front end, which gets extra side vents, while there’s a new rear diffuser, lightweight black alloy wheels and Brembo brakes. Carbon fibre is now used for the panels just ahead of the windscreen, the rear spoiler and engine air intakes.

Inside there are new, more comfortable seats and a seven-inch touchscreen display with a reversing camera. Also new is a push-button gear selector with P, R, N and D buttons.

The Lotus Elise-derived cockpit is still cramped, though, without much room for your legs next to the wide door sills. But the cabin is a bit more user-friendly, with a new, simpler dashboard display, in addition to screens showing navigation messages and trip information.

With 288bhp and instant torque of 400Nm, the Roadster Sport is incredibly fast, hitting 0-62mph in 3.7 seconds and a top speed of 130mph. This acceleration is accompanied by a whir from the electric motor and wind noise as the speed rises.

Thanks to improved chassis rigidity, there are fewer rattles in the cabin, while a new adaptive suspension system offers 10 different modes, going from comfortable to track-day hard.

On the move, the Tesla feels like the heavier Lotus Elise that it is, with strong grip and agility. However, it isn’t as lively in bends – the steering is weighty and could do with more feedback. The regenerative braking effect also takes time to get used to – lift off the throttle, and the Tesla slows immediately! It’s only when braking for an emergency that you really need to hit the brake pedal hard.

Any weaknesses? Well, it takes a light foot to achieve the car’s theoretical 235-mile range. Charging can be carried out via a conventional plug, but most owners who can afford the £103,000 price tag are expected to use Tesla’s fast charger, which takes four hours to top up the batteries.