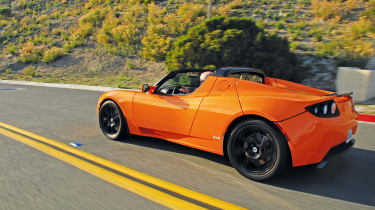 Nearly two years after its launch, the Tesla is still a stunning engineering feat. Combining the agility of a Lotus and pace of a Ferrari with zero environmental impact is some achievement – and the Sport has raised the bar further. A lower price would be more tempting still, which is why we can’t wait for the cheaper four-door Model S, due in 2012.

The battery-driven Tesla Roadster has been given a boost – and Auto Express got the chance to put the new car through its paces. But is the performance as electric as the figures suggest?

The bhp and torque increase has been achieved via upgrades to the electric motor, which is mounted sideways at the rear axle. Also tweaked are the lithium-ion battery stack, the single-speed transmission and the Power Electronics Module – effectively the Tesla’s brain.

The result is a 40bhp power hike, taking output to a storming 288bhp. Importantly, 400Nm of torque is available from zero rpm, too. There’s no exhaust noise; only the whine as the electric motor’s rotor spins all the way to 14,000rpm.

You’re squashed into your seat by the surge of acceleration, which doesn’t relent until the limited top speed of 125mph.

As with any electric car, the Tesla’s practicality is limited by its battery life. A claimed 200-mile range can be achieved only with a light right foot. Exploit the newcomer’s full potential and this will drop dramatically.

Sport trim adds 10-setting adjustable dampers, lightweight forged aluminium wheels and ultra-high-performance tyres. The resulting ride is far more civilised than that of the Lotus Elise on which the Tesla is based, while additional soundproofing boosts high-speed refinement, too. Best of all, the Lotus chassis still sparkles through corners.

The eye-watering price will put off many buyers, but there’s nothing quite like the Tesla on sale today – and the new Sport version is the best of the breed.