The GT 86-based Toyota GR HV Sports concept has been revealed at Tokyo, featuring a Supra-styled targa top 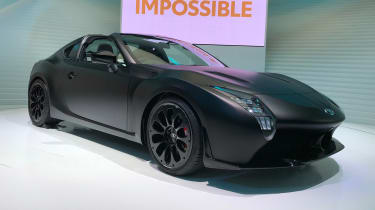 Toyota has revealed four new models at the Tokyo Motor Show, with the striking GT 86-based GR HV Sports concept at the forefront of the display.

Said to "integrate the thrill of a sports car with the environmental friendliness of an eco-car", the design study concept features a hybrid-electric system similar to that of the TS050 Hybrid Le Mans Prototype. The GR HV Sports also features a targa top last seen on the Supra sports car, which ended its long production run in 2002.

The new GR HV Sports concept forms part of Toyota’s new GR range that takes its initials from Gazoo Racing, the brand's in-house racing company. The team fields the TS050 in the FIA-sanctioned World Endurance Championship, with some of the car's aggressive design passed over into this new concept. 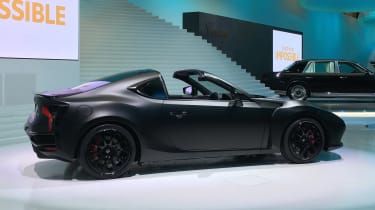 Also making its premiere at the Toyota stall is the TJ Cruiser crossover. Toyota’s aim for the TJ Cruiser is to blend a van with an SUV. The box-shaped design is similar to that of commercial vehicles as well as the existing FJ Cruiser, but its SUV tyres and large front grille help it stand out from ordinary vans. A 2.0-litre petrol-electric hybrid powertrain is set to feature on the TJ Cruiser, which also has the option of front-wheel-drive and four-wheel-drive.

Along with the sports car and crossover, the Crown Concept was also unveiled in Tokyo. The four-door concept will blend the historic Crown name given to Toyota’s luxury saloons since 1955, as well as new innovative features such as ITS Connect, a service that shares live traffic updates. The Crown Concept has also undergone testing at the Nurburgring in order to improve handling and stability.

What do you make of the Toyota GR HV Sports? Let us know in the comments section.