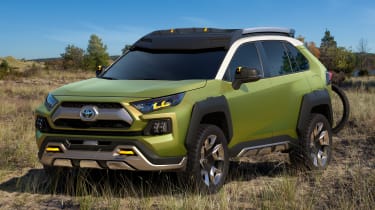 Toyota has unveiled the FT-AC concept (Future Toyota Adventure Concept) at the LA Motor Show, a rugged 4x4 that can broadcast your journey on social media.

The concept features a host of infrared cameras, which are connected to the car’s integrated WiFi system so that it can broadcast off-road excursions live on social media. The footage is uploaded automatically to a cloud-based storage system where the driver can edit their trips in real-time.

More significantly Toyota says that the concept uses some form of petrol engine combined with an all-wheel drive system and torque vectoring, but that it could feature the next-generation of Toyota’s all-wheel drive hybrid powertrain. That would indicate the concept is based on Toyota’s new TNGA platform, which underpins the new Prius. 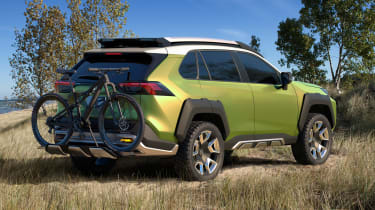 The concept is fitted with LED headlights and fog lamps that can be removed from their housing and used as torches. A wide track, high ground clearance and 20-inch alloys wrapped in chunky all-terrain tyres are fitted to assist when you head off-road.

Completing the look it a safari-style roof rack that can be operated remotely, while a bike rack has also been integrated within the rear bumper. Toyota has said that the FT-AC concept is purely a design study with no intention to put it into production.

What do you think of the Toyota FT-AC Concept? Let us know in the comments section below…