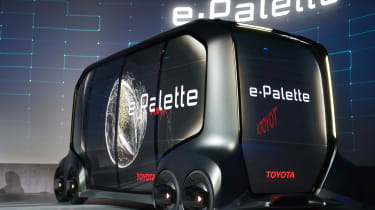 Toyota has revealed the e-Palette Concept at this year’s Consumer Electrics Show (CES) in Las Vegas, with the aim of enhancing the Japanese manufacturer’s presence as a Mobility Services Platform (MSPF).

The e-Palette is a fully autonomous EV and comes in three different sizes, ranging from four to seven metres long. It’s designed to be fully customisable inside and out so it can be tailored around the needs of a customer or business; that may be space for an individual to work on the move or room for a company to deliver goods. Toyota hopes to be able to totally transform the interior of the e-Pallete within 24 hours in the future. This would mean that a single vehicle could quickly switch between potential uses that range from ride-sharing and a mobile shop. 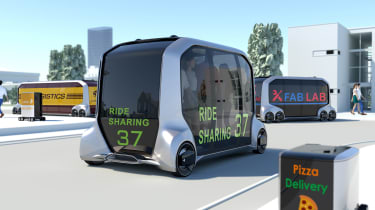 Toyota says the e-Pallete features a next-generation vehicle control interface and can also have its software updated over the air, like Tesla's current range of EVs. The brand is also intending to use solid-state batteries to power the e-Pallete.

• Our guide to self driving cars

Toyota plans to conduct feasibility testing of the e-Palette Concept by the early 2020s. The Japanese brand has earmarked the Tokyo Olympics games in 2020 to test a fleet of e-Palettes to help improve transport links for attendees. 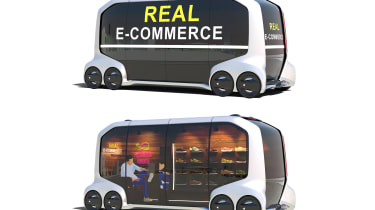 Also announced at CES by Toyota was the creation of the e-Palette Alliance, which includes companies such as Amazon, Mazda, Pizza Hut and Uber. Toyota says these companies will help collaborate on vehicle planning of the e-Palette itself.

“The automobile industry is clearly amid its most dramatic period of change, as technologies such as electrification and connected and automated driving are making significant progress,” said Toyota CEO, Akio Toyoda. “Toyota remains committed to making ever-better cars. Just as important, we are playing our part to create an ever-better society for the next 100 years and beyond.”

The likes of Uber and Amazon have already looked at autonomous passenger and parcel delivery methods prior to becoming part of Toyota’s e-Palette Alliance, with the latter already implementing self-flying parcel delivery drones.

What do you think of the Toyota e-Palette concept? Let us know below...