The Toyota GR Super Sport will feature a 2.4-litre twin-turbo V6 hybrid powertrain when it enters Le Mans in 2020 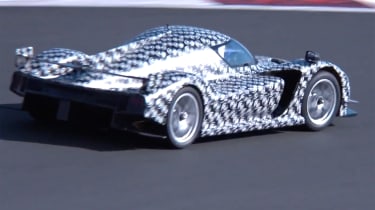 Toyota has issued a teaser video for the GR Super Sport hypercar, showing a pair of heavily camouflaged development cars lapping Fuji Speedway in the hands of the firm’s CEO, Akio Toyoda. When complete, the new hypercar will act as Toyota’s entry into the new hypercar class in the 2020 World Endurance Championship, eventually competing against the Aston Martin Valkyrie at Le Mans.

Toyota first revealed the GR Super Sport in concept form at the 2018 Tokyo Auto Salon, announcing shortly afterwards that it would build a limited number of road-going versions for homologation purposes. Given the World Endurance Championship regulations require all homologated cars to be built within two years of the start of the competition, we expect the GR Super Sport will go on sale by 2022.

The test car’s styling hasn’t changed too drastically from the concept version, with revisions being limited to a redesigned nose, a reworked front splitter and a pair of low-mounted exhausts in place of the concept’s top-exit units. One of the two prototypes which feature in the video also comes with a large roof scoop and we suspect this is the race-spec model.

The GR Super Sport will feature a similar 2.4-litre twin-turbo V6 petrol hybrid powertrain to the firm’s TS050 Hybrid LMP1 racer. The petrol engine is assisted by an electric motor and sends its power to the rear wheels, while the front wheels are driven by two separate electric motors.

The race-spec GR Super Sport will be limited to 750bhp; a stipulation of the “Hypercar” series’ regulations. However, Toyota has confirmed that the TS050 powertrain can be “turned up” to 1400bhp by increasing the amount of power the batteries supply to the motors, giving scope for the road-going version to feature a four-figure horsepower unit.

It’s not the first time Toyota has planned on building a production Le Mans racer, either. In 1998, when Toyota ran the GT-One (TS020) Le Mans Prototype, they created a road-going concept, with the intent of building a handful of production models. Only two were homologated for road use, one of which is on display at Toyota Motorsport’s headquarters in Germany.

Are you excited to see the new Toyota GR Super Sport compete at Le Mans. Let us know in the comments section below…