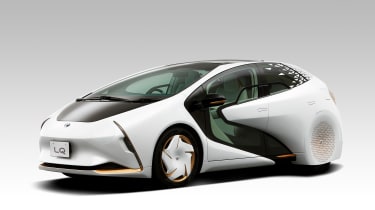 This is the new Toyota LQ. It’s an autonomous all-electric concept car which will be revealed at the Future Expo special exhibition of this year’s Tokyo Motor Show. Toyota says the concept will feature an advanced artificial intelligence system, which will build an emotional bond with its driver and offer a personalised driving experience.

Toyota claims “Yui”, its artificial intelligence system, will adapt the cabin lighting, climate control and interior fragrance based on the driver’s emotional state and alertness. The system can also select and play music based on the driving route, as well as offer the driver real-time traffic information and local points of interest.

• Concept cars: the greatest designs of all time

Toyota’s LQ concept also features an automated valet parking system, comprising a range of sonar and radar sensors, an array of cameras and a 2D road mapping system. Toyota says the system will improve accessibility for those with mobility limitations, and maximise space in car parks by reducing clearance between adjacent vehicles to just 20 centimetres.

Inside, the LQ concept features a pair of unique air-conditioned seats which house a series of inflatable air bladders. When the car’s driver monitoring system recognises that the driver is tired, it activates the seat’s cooling system and inflates the air bladder in seat back to help keep the driver awake and promote good posture.

There’s also an augmented reality head-up display, jointly developed with Panasonic, which projects a range of driving information (such as speed, road signs and navigation instructions) onto the car’s windscreen. Toyota says the system has a depth of up to 41 metres ahead of the vehicle and helps keep the driver focussed on the road.

Finally, the concept’s cabin features a range of LED panels embedded in its roof and footwells, which light up depending on which passenger Yui is addressing. However, the rest of the interior is surprisingly conventional, with a normal-looking steering wheel, an ordinary pedal box and regular switchgear.

From June to September of next year, Toyota will offer the chance for select members of the public to test drive the LQ concept in Tokyo. Applications will be taken shortly, by means of a dedicated smartphone application.

What do you make of the new Toyota LQ concept? Let us know in the comments section below…