All-new Hilux pick-up is available to order now priced from £19,177 ex.VAT, with deliveries in July 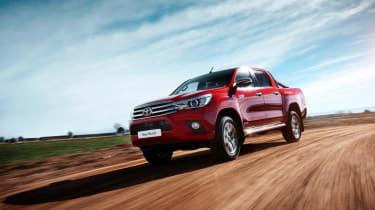 Toyota has revealed UK prices and specs of its latest-generation Hilux pick-up. The Mitsubishi L200 rival starts from £19,177 with a new 2.4-litre diesel engine, and is available to order now.

A total of 16 million Toyota Hilux pick-ups have been sold around the world since the model was introduced in 1968, so it's an important vehicle. UK buyers get a choice three bodystyles and four trim levels, and deliveries will commence in July.

The £19,177 starting price (excluding VAT) gets you a single cab model in Active spec with a six-speed manual gearbox. That comes with Bluetooth, two airbags, hill start assist, heated mirrors and air-con. A five-year/100,000-mile warranty is also included. 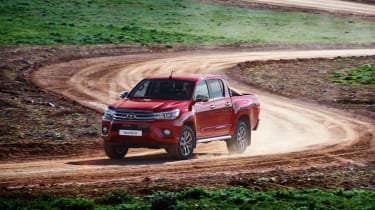 According to Toyota, the new Hilux has a 20 per cent stronger ladder chassis, reinforced deck structure, enhanced 4x4 capabilities and an improved towing capacity. It's also said to be more refined on the road as Toyota chases the 'lifestyle' pick-up market. That said, it lacks the multi-link rear suspension of the new Nissan Navara that acquitted itself so well in our UK review.

The Hilux is 90mm longer, 20mm wider and 5mm lower than its predecessor, improving internal space and load carrying, while towing capacity has improved to 3.2 tonnes. 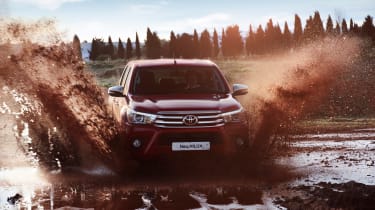 The manual Hilux also manages 106mph and a 0-62mph time of 13.2 seconds. A six-speed automatic gearbox is available as an option on top-spec trims.

The new Hilux gets a new exterior design with better equipment – daytime running lights with 12 white LEDs feature, while the main design changes are focused on the front grille, light clusters and bumpers. Either 17-inch or 18-inch alloy wheels are available, plus there are three new paint colours: Orange Spice, Volcano Red and Hydro Blue. 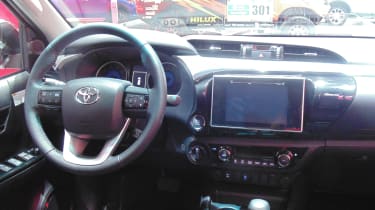 Are you a fan of the Toyota Hilux? Let us know why in the comments below...

Welcome to our Geneva Motor Show hub page, scroll down for all our Geneva content...
Toyota Hilux pick-up review