Toyota test mule bares a RAV4 shape but with a Prius front end, hinting of a possible evolution of the Prius+ MPV 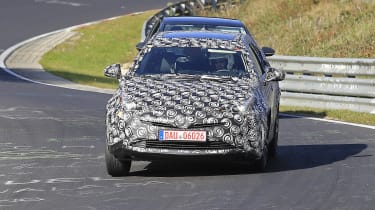 A test mule of a Toyota Prius SUV has been spotted undergoing performance testing at the Nurburgring in Germany, indicating that Toyota could have redesigned the seven-seat Prius+ MPV into a crossover for its next generation.

Toyota launched the Prius+ MPV back in 2011, and with an all-new Prius on the market it’s likely this test mule is an evolution of the hybrid people carrier. The biggest giveaway that it’s a Prius SUV is the front end, which features a set of headlamps taken directly from the standard Prius hatchback.

The test car is also noticeably bigger and more angular than its MPV predecessor. The raised ground clearance and chunkier alloy wheels are also apparent in the spy shots. 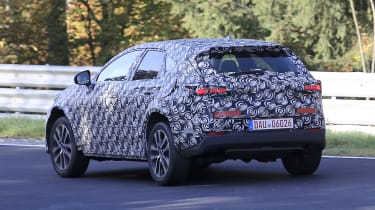 Should it be introduced, the Prius crossover will join the Japanese marque’s SUV line-up alongside the RAV4 and Land Cruiser. It’s likely that it will sit in the middle of Toyota’s SUV range, behind the bigger Land Cruiser and ahead of the RAV4, which recently gained from hybrid power across the range.

Given the Prius is famous for its hybird powertrain, the SUV model would almost definitely stick with same setup. Toyota may tweak the powertrain so that it develops more than the 121bhp in the hatchback to offset the heavier kerbweight of the SUV.

Toyota has been actively teasing concepts ahead of this year’s Tokyo Motor Show that kicks off next week on the 27 October. The main gist of its Tokyo releases so far has been EV compatibility, so there’s a good chance we might get more information on an SUV Prius over the next few weeks.

Would you buy a Toyota Prius SUV? Tell us what you think of it below.