Toyota's Yaris supermini gets an extensive facelift ushering in a sharper look, more driver assists and a 1.5-litre petrol engine 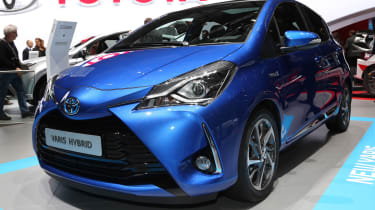 Toyota has revealed full UK prices and specs for the new 2017 Yaris, and the revised supermini is on sale in the UK now following its debut in the metal at the Geneva Motor Show last week.

The 2017 Yaris introduces a new look, new technology and a new petrol 1.5-litre petrol engine. Prices start at £12,495, meaning the very cheapest version of Toyota’s supermini is now £1,000 more than the base version of the outgoing model.

In terms of styling, the 2017 Yaris has been refreshed on the outside with tweaks intended to make the car look sportier and wider. At the front, it gets an evolved, sharper face with new headlights, a new front grille plus a simpler nose, while the door mouldings down the side are placed lower. 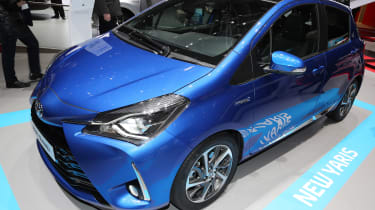 The changes continue around the back with new horizontal taillights, a revised tailgate as well as a new rear bumper. Buyers will be able to spec their cars with new three new alloy wheel designs, alongside two new paint colour options. LED daytime running headlights plus LED taillights make the options list.

In the cabin, new colours, trims and upholstery options are available, and are combined with revised dials, new “propeller” style air vents and new look switchgear. The most important introduction is a 4.2-inch colour display embedded in the instrument binnacle, which comes as standard on Icon trim cars and up. 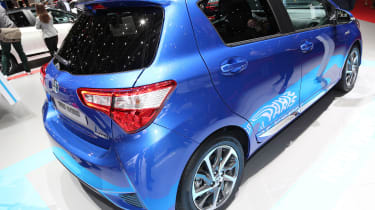 In terms of engines, Toyota has revealed that a new 1.5-litre four-cylinder petrol is one of the powerplants making its way into the 2017 Yaris. With this new larger engine, Toyota promises more power, torque and performance, but crucially improved fuel economy and lower CO2 emissions. It develops 110bhp and 136Nm of torque with Toyota claiming the new 1.5-litre will be 0.8 seconds quicker to 62mph than the current 1.3-litre car, taking 11 seconds flat.

Overtaking speeds are where the big gains are found though, and the new unit will pull from 50mph to 75mph 1.2 seconds faster.

With a CVT gearbox, Toyota claims it’s up to 12 per cent more efficient, thanks partly to the introduction of a new water-cooled exhaust manifold. 56.6mpg and 109g/km CO2 is quoted.

A hybridised version of the new 1.5-litre petrol – which Toyota claims is now quieter - will also go on sale, alongside a 1.0-litre three-cylinder turbo petrol producing 68bhp. We also know that Toyota is plotting a hot-hatch version of the new Yaris, which could have up to 210bhp.

All models in the Yaris facelift range get plenty of driver safety assists as standard. The Safety Sense kit includes a pre-collision warning system with autonomous emergency braking, automatic high-beam lights as well as lane departure warning. All cars bar the entry-level model get traffic sign recognition capabilities too. 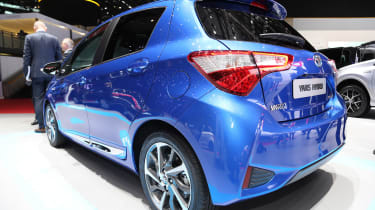 Entry level Active models start from £12,495, with the very cheapest 1.5-litre hybrid Yaris costing from £15,995 in this trim level. The 1.5-litre petrol without hybrid assistance is available on the next trim up - Icon - and is priced from £15,295. Four more trim levels - Icon Tech, Design, Bi-Tone and Excel - round up a broad range.

What do you think of the new Toyota Yaris? Let us know in the comments below. 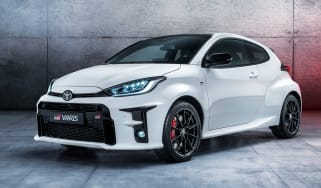 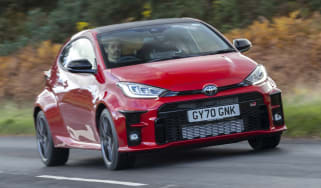 The new Toyota GR Yaris has arrived with 257bhp, but what's it like on the road?
Affordable Hybrid Car of the Year 2020: Toyota Yaris 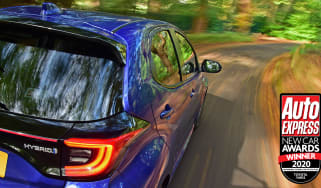 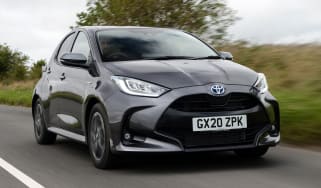 With sharper styling and frugal hybrid-petrol engines, the Toyota Yaris is ready to compete with the best in the supermini class.