Partner small van shares technology and looks with Rifter MPV, and has already bagged an award 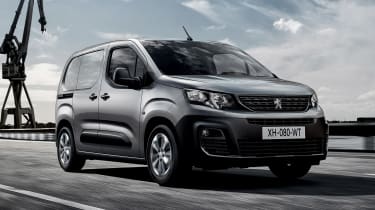 Peugeot has revealed UK prices for the new Partner panel van, which is on sale in the UK now priced from £15,825 before VAT.

For those after three front seats, the Grip trim level is offered. This model is also suited to carrying heavy goods, fitted with a protective plate under the engine and sprung 30mm taller. It also gets larger wheels and can take a payload up to one tonne, and its abilities are enhnced with hill descent control and grip control. Again, two versions are available from £17,075 and £18,700 for the Long version.

The Asphalt model is aimed at drivers doing longer trips and plenty of urban deliveries. 3D navigation is standard, as is extra sound deadening. It also gets the Surround Rear Vision system, Automatic Electronic Parking Brake and Visibility Pack with automatic headlights and windscreen wipers all help to reduce the stress of daily driving. 16-inch alloy wheels alongside body coloured side rubbing strips, door handles, exterior rear view mirrors and rear bumper all add to its assertive and modern design. Prices start at £19,970 for the Standard version and £21,820 for the Long version.

Peugeot's chunky newcomer gets a bit of a crossover style makeover to help it stand out in the busy sector. It shares its bodywork with the recently revealed Peugeot Rifter MPV, so it features boxy styling, a chunky grille and plenty of design touches to help separate it from the similar Citroen Berlingo Van, as well as the new Vauxhall Combo which it also shares technology with.

While standard-issue black bumpers and steel wheels give the Partner a typically van-like appearance, the high-set grille has a similar shape to that seen on the 2008 and 3008 SUVs, as Peugeot embraces the crossover design ethos for all of its models.

And like its passenger car contemporaries, the Partner features Peugeot's i-Cockpit dashboard layout, which helps to differentiate it from the Citroen and Vauxhall versions of the van. That means there's a small steering wheel with the dials set high on the dashboard so you can see them above the wheel. 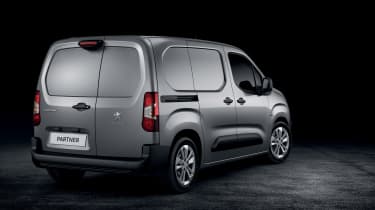 The dash also features an eight-inch touchscreen - with the climate controls located below - while technology on board includes a head-up display and traffic sign recognition.

Also new for the Partner is a three-abreast seating layout - made possible by moving the gear lever up to the dashboard - while a steel bulkhead is now fitted behind the cab. As well as standard and long-wheelbase variants, Peugeot will also offer a crew van version featuring a second row of seats that are taken from the Rifter and a mesh buklhead that can be fixed in different positions.

For the standard panel van, buyers benefit from payload weights that range from 650kg to one tonne, while the load area is 1.81 metres long. There's enough room for two Europallets inside, while the long van has a maximum load length of 2.16 metres. Load bay capacity ranges from 3.3 to 4.4 cubic metres, while a variety of door options are available, including one, two or zero sliding side doors, and glass windows for all the load area doors. There will also be a roof hatch available that will allow longer items to be carried.

Under the skin, the Partner comes with a platform that combines the front section of the latest EMP2 chassis with an updated version of the outgoing Partner's rear suspension. That means Peugeot has been able to include some advanced safety kit, including adaptive cruise control and autonomous emergency braking, while retaining the practicality that made the outgoing Partner so popular. 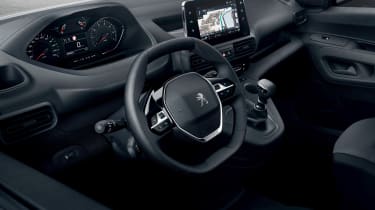 Peugeot will also offer a Partner 'Grip' model that boosts its crossover credentials. This will add switchable traction control plus mud and snow tyres - much like top-spec versions of the 2008 crossover - and is as close as you can get to a Partner 4x4.

While an electric Peugeot Partner EV will hit showrooms in the future, at launch there will only be petrol and diesel engines offered. These comprise the PureTech three-cylinder turbo petrol and a BlueHDi diesel. They will be offered in a variety of power outputs, while an eight-speed EAT8 automatic features on the most powerful engines in the range.