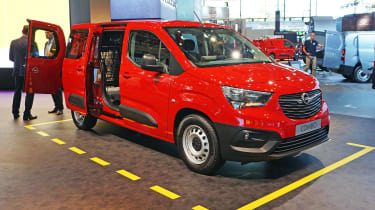 Vauxhall has announced prices for the new Combo van, while the newcomer has also been awarded with the 2019 International Van of the Year title. Prices start at £15,630 (+VAT) for the Edition model. For that, you get a DAB radio with Bluetooth, a five-inch display and electric windows and mirrors. The next trim level up, the Combo Sportive, is priced at £17,705 and adds metallic paint, body coloured bumpers, air conditioning and a six-way adjustable driver’s seat with lumber support.

Spend £18,905, and you can have the range-topping Combo LE Nav. This adds 16-inch alloy wheels, a smattering of additional painted trims and an eight-inch touchscreen featuring Vauxhall’s own navigation system, NAVI, Apple CarPlay and Android Auto. All Combos are available in a standard short wheelbase, a long wheelbase (extended by 35cm) and a crew cab with seating for six.

As well as reasonable pricing, the Combo van should also be reasonable to run. Vauxhall’s new 1.6 litre, 98bhp diesel claims economy figures of 67mpg and, thanks to its class-leading emissions ratings, the Combo scrapes into to the £145 road tax bracket.

These highlights helped the Combo with the 2019 International Van of the Year crown, which was revealed at the recent IAA Commercial Vehicle Show in Hannover, Germany. Judges put the Combo ahead of the new Mercedes Sprinter in the contest, highlighting its advanced safety tech and driver aids. This includes adaptive cruise control, lane departure warning and automatic emergency braking.

The Combo shares the award with its sister models, the Citroen Berlingo Van and Peugeot Partner. Speaking at the awards, Vauxhall/Opel boss Michael Lohscheller said: "We are very proud of this award, the victory shows the possibilities for Vauxhall/Opel within Groupe PSA. With the Combo we are now attacking the C-van segment – until now we have not played a prominent role here. There is great growth potential for Vauxhall/Opel in the LCV business. It is therefore appropriate that we have received the responsibility for developing a new LCV platform for the whole Groupe PSA in Russelsheim, Germany.”

Mechanically, the Vauxhall Combo van is almost identical to the Combo Life MPV – and by extension its PSA cousins the Peugeot Rifter and Citroen Berlingo. That means that it rides on a platform whose front half is shared with the Vauxhall Grandland X and Peugeot 3008 (with benefits to tech, safety and refinement), and the back half with the outgoing Berlingo (for load space and usability.)

Apart from the option of three-abreast seating, the Combo van’s interior is pretty much identical to the Combo Life. This means there’s a multifunction steering wheel with optional heating, and the possibility for owners to spec optional heated seats and dual-zone climate control. 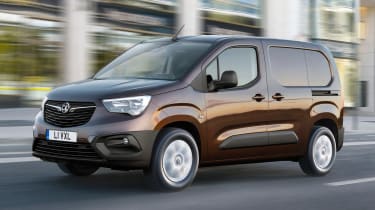 The Combo’s load space stands at either 3.8m3 or 4.4m3 for the short and long wheelbase models respectively, with both models capable of swallowing payloads of up to a tonne. Handily, the Combo’s dash will alert the driver if the van is overloaded, first with white light at 80 per cent full, and an orange light when it’s over capacity. A useful hatch in bulkhead behind the front seats also allows the loading of items up to 3,440mm in length without the need to leave one of the rear doors open.

To combat the issue of rearwards visibility, Combo LE Nav models feature two cameras. The first allows the reversing camera to operate as a digital rearview mirror when driving, displaying any following traffic through the eight-inch display. The second faces backward on the passenger side mirror. This turns on when the left indicator is activated, displaying any potential hazards on the van’s nearside blind-spot.

Besides the cameras, the Combo also offers a host of other safety features as standard such as autonomous emergency braking, lane-keeping assist, forward collision alert, advanced park assist and traffic sign recognition.