It may not be dynamically brilliant, but the Rifter does an excellent job of nailing its brief: to be as practical as possible. Tech like the i-Cockpit dials makes it feel a bit more car-like than a van with windows, and there are plenty of surprise-and-delight moments in a cabin that really works hard to make the most of the space on offer. Pricing will be key, as always, and you’ll have your own view on whether it’s enough of a crossover to tempt those buyers who won’t consider an MPV. But there’s no denying that it’s ruthlessly well-focused, rugged, capable family transport.

These are hard times to launch an MPV. As such, Peugeot is insisting that its latest practicality-focused offering, the Rifter, isn’t a traditional people-carrier but instead a crossover with cues from the firm’s SUVs.

Convinced? Neither are we. But there’s no doubt that Peugeot has gone to some lengths to try to mask the fact that the Rifter - sister vehicle to the latest Citroen Berlingo - is a box on wheels.

There’s a much shorter front overhang, for starters, with the Peugeot family face and grille. The flanks have a useful amount of surfacing - no mean feat when they also have to incorporate the rails for the sliding doors. These also accommodate electric windows, thanks to some neat insets that give the car a chunky look. 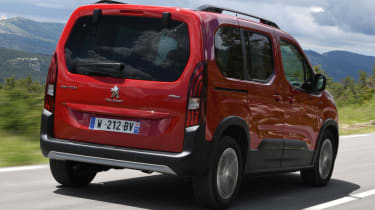 This ruggedness is enhanced further by body cladding around the wheelarches and pronounced roof rails. Does it look like an off-roader? Not really (although a four-wheel-drive version is reportedly on the way). But there is a whiff of ‘Tonka toy’ about the Rifter, which has curious appeal for something designed to be incessantly abused in family life – probably around town.

Mind you, plenty of SUVs could learn a trick or two from the Rifter’s cabin, which really is a masterclass in practical touches. There’s up to 180 litres of oddment space in the cabin alone; that’s 12 litres more in cubbyholes than a Toyota Aygo manages in its entire boot.

And this space is delivered in useful ways. There’s a big top-loading box in the dashboard - big enough for a laptop and available with a cooler - and a locker that drops down, aircraft-style, from the roof above the boot. It can be accessed from the rear seats, too. And the door bins are borderline preposterous; they can accommodate three or even four water bottles with ease.

There are actually a couple of different sizes of Rifter - standard and long-wheelbase - and both are available with either five or seven seats (the third row is removable). Choose the regular edition and you’ll have 775 litres of boot space with the second row in place, or up to 3,000 with them folded down. The bigger version, which is 35cm longer overall, offers 1,050 litres in five-seat form, rising to a startling 4,000 litres if you prioritise cargo over passengers.

Accessing the boot requires a hefty tug on the colossal tailgate (no motorised option is offered), but on some versions you’ll also be able to get to the cargo by opening the glass - like on many BMW estates.

Peugeot is working on an electrified version of the Rifter, but in the meantime, customers can choose from a variety of petrol and diesel options. The 1.2-litre PureTech three-cylinder petrol is offered with 109bhp and a six-speed manual gearbox at launch, although a 128bhp version with an eight-speed auto is due at the start of 2019. The 1.5 BlueHDi diesel comes in three states of tune: the 74bhp and 99bhp versions get a five-speed manual, while the 128bhp car gets a six-speed box.

Peugeot UK is still crunching numbers on pricing but we do know that the car will be offered in three trim levels: Active, Allure and the flagship GT Line we’re trying here. Specs have yet to be confirmed, too, but expect the entry editions to miss out on the eight-inch touchscreen and get manual air-conditioning instead of climate control. They’ll probably do without snazzy wheels, too, making do with 15-inch items with plastic covers; higher-end versions get up to 17-inch alloys.

It will hardly surprise you to learn that the Rifter is not the last word in agility or performance on the road - but the 128bhp BlueHDi auto that we tried had more than enough shove to attempt brisk progress. It tries its best to hang on in corners and there’s actually a surprising amount of initial bite in the steering - a result, perhaps, of the EMP2-based front end that shares components with more conventional Peugeot hatchbacks and SUVs. But throw the Rifter at a corner with any amount of gusto and you’ll be greeted by a fair amount of body roll. The nose will start to wash wide shortly afterwards. 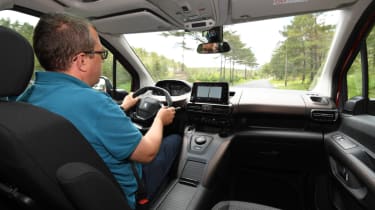 It’s at its best at a motorway cruise, when the diesel engine fades away nicely, leaving only a consistent whoosh of wind noise – a reminder that you’re driving a slab-sided vehicle. And in town, where the comfortable ride soaks up minor road imperfections seamlessly and the auto box does a good job of shifting slickly and intelligently. Throw in the elevated driving position and the short overhangs and you get a car that belies its size on congested roads. We doubt the long-wheelbase one would be as forgiving, mind.

We’d certainly steer you towards the BlueHDi instead of the 109bhp PureTech petrol. It was no less refined, but with only 205Nm instead of the BlueHDi’s 300Nm, it felt decidedly less comfortable with the Rifter’s bulk - and that was with a regular-wheelbase version with only two people aboard, not five. The handling was affected too; with less weight over the nose, the petrol Rifter was a little more prone to bobbing along over undulating roads and becoming unsettled through corners. The manual gearbox has a typically vague PSA linkage, incidentally, so we’d opt for an auto.

The environment for the driver is a curious mix. Peugeot’s i-Cockpit system is present in one of its most convincing configurations yet, because the seating position and dashboard height mean that you naturally look over the smaller steering wheel. The taller dash has also allowed room for physical switches to control the heating and ventilation - so you don’t have to fiddle through sub-menus in Peugeot’s infotainment system like you do on the latest 508.

This all sounds positive enough, and it is - but the cabin’s materials are focused on durability more than any tactile pleasure. Hard, shiny plastics abound – although at least there’s a (small) piece of padded fabric where your elbow tends to rest on the door inlay. It’s probably a sensible enough set-up for a vehicle designed for family life, but a bit more thought on the textures might have helped the Rifter to impress through aesthetics as well as load space.