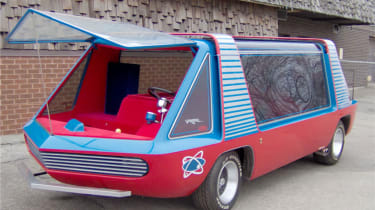 Would you buy a van known as ‘The Love Machine’? Barrett-Jackson auctions is hoping someone will. The mad creation, also known as the SuperVan, from famed car customiser George Barris, will go under the hammer later this year.

The incredible Supervan won’t be much use for a trip to the builders’ merchants, as the interior is set up with partying firmly in mind. To that end, the LED task lighting you might find on a Ford Transit Custom makes way for a roof-mounted disco ball and lava lamp, while sliding side doors are substituted for massive windows giving a great view out (and in). Once inside, van party guests can relax on a six-foot U-shaped sofa, enjoying the best in-car entertainment that the 1970’s had to offer – a colour TV, VHS player and an intercom phone. Entry to the cab is made through the front windscreen. 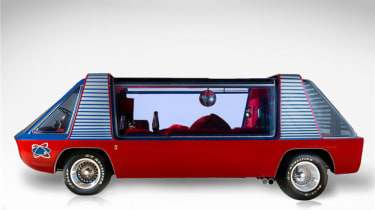 The underlying mechanicals do at least come from a workhorse. The SuperVan is based on a Dodge A-100 Tradesman, which has a 318-cubic-inch (5.2-litre) V8 engine mated to a three-speed manual gearbox.

The SuperVan has had quite the Hollywood career. It featured in the 1977 film ‘SuperVan’ where it was named ‘Vandora’. Then it returned for Back to the Future II, where it was repainted and used as a Hill Valley Transit bus.

The SuperVan is the creation of ‘King of Custom’ George Barris, who sadly passed away last year at the age of 89. In his time though, he was responsible for a huge number of custom hot rods and lowriders, but the most famous of all is surely the original TV Batmobile. 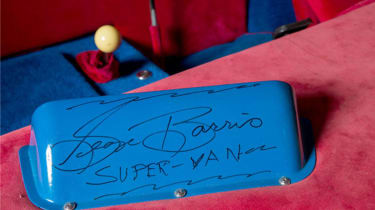 Barris’ passing may well shore up the price of the SuperVan when it comes up for sale. Barrett-Jackson auctioneers won’t offer an estimate, and will sell the vehicle without a reserve so the price is anyone's guess. The original Batmobile went up for sale and sold for $4.62 million, so it’s unlikely the SuperVan will sell for pocket change. It’s made especially valuable with Barris’ autograph on the instrument binnacle.

Would you buy the 'SuperVan'? What would you use it for? Let us know what you think in the comments...