Pricing information for the revamped Vauxhall Astra range has been announced, with prices starting from £18,885 for the hatchback variant

Vauxhall has confirmed the updated Astra, which is on display at the 2019 Frankfurt Motor Show, will start from £18,885, with the estate range kicking off at £20,355. First deliveries are scheduled for November.

Mid-range SRi and SRi Nav models start from £21,895 and £22,595 respectively. Upgrades include 17-inch alloy wheels, a front camera system, sports seats, chrome window trim, LED headlamps and an alarm. Sitting above both these models is the Astra SRi VX Line Nav, which starts at £24,195 and adds front fog lamps and black trim.

Range-topping Elite Nav and Ultimate Nav variants have respective price-points of £23,955 and £23,755. Both trim levels get a larger eight-inch infotainment system, as well as an eight-inch digital gauge cluster, climate control, heated leather steering wheel, leather upholstery and heated front and rear seats. The former is fitted with 17-inch alloys, while the latter comes with 18-inch alloys.

Additional features for the Astra Ultimate Nav include a premium Bose audio system, a wireless smartphone charger and Vauxhalls’ IntelliLux Matrix LED headlamps which automatically “cut out” oncoming traffic from the car’s headlight beam, reducing glare for other road users.

In terms of design, little has changed on the facelifted Astra. Its interior remains the same as the outgoing model and the only noticeable difference to its exterior is up front, where a new upper and lower grille design contributes towards a slightly more aerodynamic profile.

However, under the skin, the Astra’s revisions are far more involved. A host of chassis and technology updates now feature, along with a new range of petrol and diesel engines. As the current Astra was a product born during Vauxhall’s period under General Motors ownership, though, the new engines do not come from new owner, Peugeot-Citroen Group (PSA).

Petrol power now comes exclusively from turbocharged three-cylinder units, developed at Opel’s headquarters in Russelheim, Germany. Two engine displacements are available, with buyers given the choice of either a 1.2-litre or 1.4-litre unit.

The 1.2-litre engine is offered in three states of tune, with each being mated to a six-speed manual gearbox as standard. The entry-level version develops 108bhp and 195Nm torque, with 128bhp and 143bhp variants sitting above it. All three engines offer a fuel economy figure of 51.4mpg and emissions ratings of 99g/km of CO2. 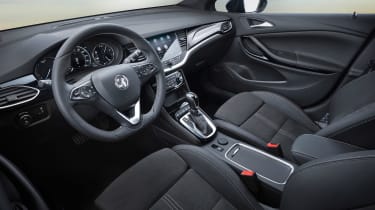 Like the most powerful 1.2-litre petrol, the 1.4-litre car also develops 143bhp, but torque creeps up to 236Nm, while a CVT transmission with seven ‘false-ratios’ is fitted by default. Economy and emissions figures stand at 46.3mpg and 112g/km of CO2 respectively.

The Astra’s range of diesel engines is also now made up exclusively of three-cylinder units. A new 1.5-litre diesel engine with electronic turbocharging has arrived, developing 104bhp and 260Nm in its most basic state of tune. It’s linked to a six-speed manual gearbox as standard.

A more powerful, 120bhp and 300Nm version of the engine is also available, which Vauxhall claims is capable of 60.1mpg and 124g/km CO2 under WLTP. As an optional extra, the unit can be specced with a freshly developed nine-speed automatic gearbox, which sees torque drop to 285Nm and results in a slight hit to fuel economy, too. 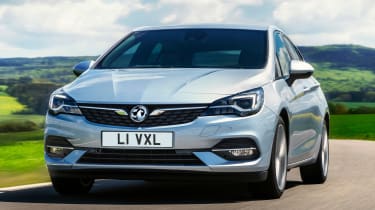 Technology updates on the revised Vauxhall Astra include the arrival of a new digital front camera, which is smaller but more powerful than the one equipped on the pre-facelift car, thanks to new processors. Vauxhall claims that the higher-grade camera helps to improve the Astra’s traffic sign recognition system.

Finally, Vauxhall has reworked the Astra’s suspension system, to keep it competitive with the Volkswagen Golf, the Ford Focus and the Mazda 3. A fresh set of new shock absorbers now feature, which the British brand claims has resulted in a better ride quality.

What does the new facelifted Vauxhall Astra have to beat? These are the best hatchbacks on sale right now…