The new Vauxhall Corsa-e shares PSA underpinnings with the Peugeot e-208, and boasts a 211-mile range

UK prices for the pure-electric version of the next-generation Vauxhall Corsa have been confirmed. Including the Government's plug-in car grant, the new Corsa-e will start from £26,490, while the first 500 customers to place an order will receive a free home charging kit.

When first deliveries begin in April 2020, the Corsa-e will be the first new product produced by Vauxhall since it came under the ownership of Peugeot-Citroen (PSA). It will also launch the brand’s strategic push towards the electrified and all-electric market.

The Vauxhall Corsa-e sits on broadly the same underpinnings as the recently-released Peugeot e-208, using a platform called e-CMP. That means a 50kWh battery pack and a 134bhp electric motor driving the front wheels, coming together for a maximum range of 211 miles on a single charge. Three drive modes are present: Normal, Eco and Sport. 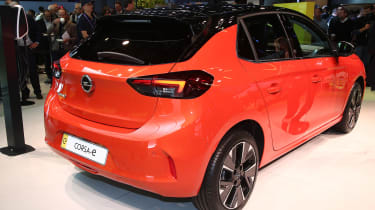 Vauxhall claims that the 211-mile figure is taken from the car in Normal mode, while sport unlocks maximum performance in a trade off of around 10 per cent - or 21 miles - from the maximum range. Eco mode turns all of the car's systems towards maximising range, with Vauxhall claiming a 40 per cent advance over the range you'll find in Sport mode. Do a bit of hasty maths, and it means that the Corsa-e has an unofficial maximum claimed range of 266 miles - though that's not a figure Vauxhall itself claims.

An 80 per cent top-up of the battery takes 30 minutes using a 100kW rapid charger, while an 11kW charger for home use is included as standard. UK buyers will be offered with a choice of two trim levles. Both will come as standard with alloy wheels, LED headlights, rear parking sensors. Lane keep assist will be offered on the Corsa for the first time, alongside traffic sign recognition, blind spot assist and adaptive cruise control. Safety tech and assistance features include automatic emergency braking, automatic parking assistant and a rear view camera. 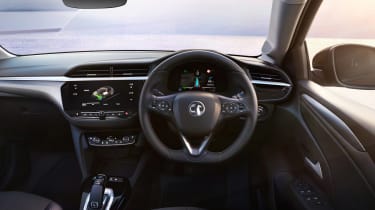 In addition to the pure-electric Corsa, Vauxhall-Opel plans to offer an electrified variant of every model in its range by 2024, with a further four such models set to launch by 2020.

Two of these will be fully electric in the form of a battery powered versions of the next Mokka and Vivaro. The British brand has already revealed its first plug-in hybrid model, the Grandland X Hybrid4, which shares its underpinnings with the new DS 7 Crossback E-Tense 4x4.

Now read our in-depth review for the current Vauxhall Corsa or get the latest electric car news, reviews and analysis on DrivingElectric.com…