At last, new hatch has hit the road. Can it knock the Mondeo off its perch? 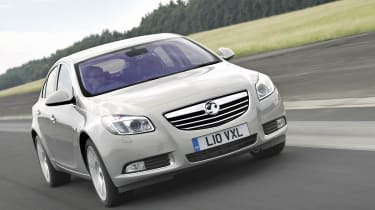 Few cars have been as eagerly awaited as the Insignia. The new family saloon is one of the most important models Vauxhall has ever launched – and it’s arriving at a time when competition has never been fiercer.

These days, it’s difficult to buy a bad large family car – the engineering revolution that has taken place in the past few years has put paid to that. But which is best? Well, the Ford Mondeo is king at the moment, so that’s what the Insignia has to beat. We were impressed by the pre-production version we drove in Issue 1,025. So now the finished article is here, what’s the verdict?

Well, before we answer that question, let’s feast our eyes on the styling. Unlike the Vectra it replaces, the Insignia is a car that’s full of flair and imagination. While the previous machine was boxy and bland, the newcomer is sleek, stylish and sporty. From the front to the back, the shape is cohesive and easy on the eye – and although it has a large grille and liberal use of chrome, it’s not garish. Just confident.

Inside, that feel continues. Vauxhall has made some big leaps both in terms of cabin design and quality. The interior is classy and spacious, and the only problem is the dark plastic on the centre console, which shows up finger prints and is prone to squeaks and rattles on the move. Apart from that, it’s well worthy of a premium car from BMW or Audi.

The driving position is first class, although in the back that sloping roofline does rob tall passengers of headroom. Still, there’s plenty of legroom and the boot is enormous.

Underpinning the Insignia is an all-new front-wheel-drive chassis, while many models – including the one we drove – come with Vauxhall’s new FlexRide system. This gives a choice of Normal, Comfort and Sport settings, and adjusts the suspension and throttle to suit.

So how does it drive? Well, anyone trading up from a Vectra will barely believe the difference. The steering is precise, even if it does have a strong self-centring effect, and the handling blends stability and comfort well; the balance falls somewhere in between stiffly set-up cars like the Audi A4 and softer models such as Renault’s Laguna and Citroen’s C5. We have further praise for our car’s 217bhp 2.0-litre turbo petrol engine. It’s smooth and gutsy, powering the Vauxhall up to motorway speeds with ease. The only letdown is its thirst for fuel.

Overall, there’s much to like about the Insignia. It’s a huge improvement on its predecessor – and Ford should be very worried.

Rival: Ford Mondeo We’d still give the Mondeo the edge when it comes to driving dynamics and rear seat space, but the Insignia matches it for style, quality and standard kit.