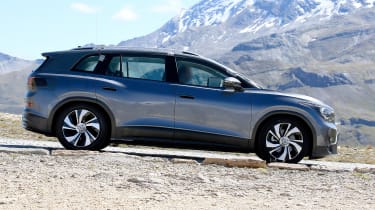 Our spy photographers have snapped a near-production ready version of the pure-electric Volkswagen ID.6 SUV, ahead of its expected Chinese-market release next year. There’s still no official word yet on whether the new model will be sold in Europe – but the fact that this test mule was spotted undergoing development in the Alps could mean it’s more likely.

The upcoming flagship Volkswagen ID.6 was previewed by the ID. Roomzz concept at the 2019 Shanghai Motor Show – and this development mule appears to have retained most of the show car’s styling features.

Volkswagen has ditched the concept’s wing-mounted cameras and swapped its quirky dot-matrix front bumper for a more conventional unit, but the SUV’s basic shape goes pretty much unchanged. The ID.6 will also adopt the same “face” as the rest of Volkswagen’s pure-electric ID. range, with similar headlamps and C-shaped grille surrounds.

The rear of the vehicle looks almost identical to the imminent ID.4 SUV – albeit scaled up to luxury SUV proportions. Volkswagen has used a similar lighting design and tailgate layout, while the rear spoiler appears to be a larger facsimile of its smaller sibling’s.

Inside, there’ll be strong similarities with the rest of the ID. line-up. Expect the same compact digital instrument cluster, high-mounted infotainment system and capacitive heater controls. Buyers should also get an ambient interior lighting system, along with a suite of eco-friendly trim, such as ArtVelours upholstery, which is made from recycled plastic bottles.

As with Volkswagen’s other electric vehicles, the ID.6 will be based on the company’s MEB underpinnings. The most potent model will feature a pair of electric motors – one up front and one at the rear – which should provide an output of 302bhp and a 0–62mph time of less than seven seconds. 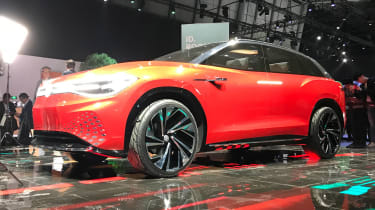 There’s no official word on range for the flagship model yet, but the ID. Roomzz concept was powered by and 82kWh battery pack, which Volkswagen said offered a range of 280 miles according to the WLTP cycle. A 150kW fast-charging system will also likely be provided, which will see the battery recover an 80 percent charge in just 30 minutes.

As with the ID.4, buyers should also be offered an entry-level, single-motor powertrain with 201bhp and smaller battery packs ranging in size between 45kWh and 77kWh – which is constant across the company’s new electric line-up, due to the layout of the MEB platform.

When it eventually reaches the global market, the ID.6 will act as a direct rival for the Tesla Model X, as well as an all-electric alternative for the flagship Range Rover, BMW X7 and Audi Q8. It will also act as the technological flagship for Volkswagen’s all-electric range.

Hungry for more EV news? Check out our list of the best electric cars on sale now…