Next VW Camper will likely use battery power, in an attempt to mirror classic design cues 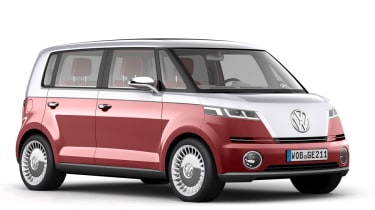 Volkswagen bosses have confirmed they are looking at electrification and battery power for its next Camper – in an attempt at keeping the iconic flat front end and short overhangs of the original.

Speaking to Auto Express at the New York Motor Show, chairman of the board Dr Heinz-Jakob Neusser, said the only way to keep the archetypal 1950s design would be to install a powerful electric motor and place batteries under the floor.

“If we want to do this on an attractive cost base, we are not able to put a rear engine into such a car.

“When we put such a vehicle on the base of the modular transverse kit (MQB), we can use it as a battery electric vehicle – because the e-motor is much smaller than a combustion engine and we can build it in another way. It’s easy to bring battery space into such a vehicle, because you can put them under the floor. We have these systems already."

And while they’re not quite ready to do that just yet, Neusser assured us that VW engineers are working tirelessly to make it happen.

“When we think this can bring us to a situation where this is feasible, then we will show it as a show car."

By the sounds of things, design is at the forefront of any next-generation VW Camper. Neusser said he wants to keep the iconic D-Pillar and boxy design as well as the compact, easy to drive body.

“If you look to the genetic things of the Bulli concept you have the need for a very small overhang. From the A-pillar, the space you have available is very, very limited.”

By removing the need for a conventional petrol or diesel engine, it allows VW to place the cabin much further forward – just like it did with the rear-engined 1950s original. There’s no word yet on when we might see the next Camper concept, but if Neusser wants to use the current-generation MQB platform, that hints it could surface within the next two to five years.