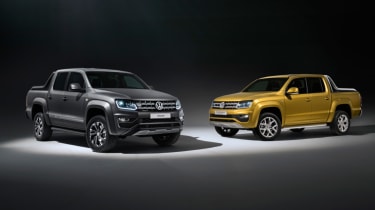 The VW Amarok Aventura Exclusive Concept is designed to give an insight into the future range topping 3.0-litre TDI engine that VW will offer in its pick-up, while the Dark Label features a host of aesthetic modifications and will be available from spring 2018.

The Aventura Concept features an eight-speed automatic gearbox mated to a permanent four-wheel-drive system, which helps distribute the 255bhp of available horsepower to the ground. That power output represents a significant 34bhp increase on that of the current flagship Amarok but the good news doesn’t stop there, as VW also claims that the torque figure will receive a similar boost. 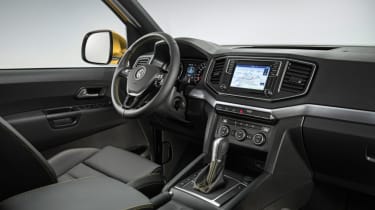 The Amarok will be displayed in a Turmeric Yellow Metallic, and a dizzying array of aesthetic enhancements. For starters, it includes high-gloss polished 19-inch Milford wheels, a cargo box styling bar, front protection grill, bi-xenon headlights with LED daytime running lights, and, for the first time on an Amarok, an aluminium lockable waterproof cargo bed.

But the Amarok isn’t just a pretty face, it has been modified on the inside – where things really count. The black seats have been adorned with contrasting Turmeric Yellow stitching and also feature 14-way adjustable ergoComfort seats. The pick-up also has a leather three-spoke multifunction steering wheel with shift paddles, a Discover Media navigation system and the new black roof liner.

The second Amarok to be revealed by the German marque is the Dark Label, which is finished in much more sedate Indium Grey matt paint. VW says the new model is aimed at “design-oriented individualists who do not wish to sacrifice the advantages of a true off-road vehicle”. Which in layman's terms translates to black sill pipes, a matt black styling bar, lacquered chrome strips in the front grille and high-gloss anthracite Rawson 18-inch alloy wheels. There are also matt black door handles, wing mirrors and a Dark Label logo on the lower door sill, all adding to a look which would have Batman reach for his cheque book.

The Dark Label is to be offered with two engines, the lesser powered 161bhp unit will only be offered with a six-speed manual, but have the option of pure rear-wheel-drive over an on demand all-wheel-drive-system. The more powerful 201bhp unit however, will have the option of a six-speed manual with on demand 4Motion all-wheel-drive, or an eight speed automatic with permanent all-wheel-drive. All variations are Euro 6 emission compliant and come with BlueMotion Technology as standard, which includes start-stop, brake energy recuperation, and low rolling resistance tyres.

Despite these additions the new models of the Amarok still remain utility vehicles at heart, with a load space big enough to house a Euro pallet sideways and providing you get the right trimline, carry over a tonne of cargo and tow up to 3.5 tonnes.

Information on any UK sales or pricing of the new Amarok Dark Label is yet to be announced.

Would you choose an Amarok over a Toyota Hilux or Mitsubishi L200? Let us know in the comments below...