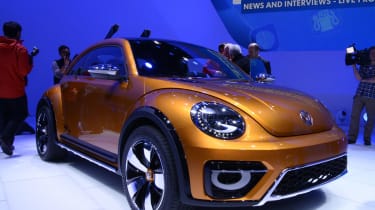 Volkswagen chose the wintery wastes of Detroit to unveil its latest concept, the Beetle Dune.

This crossover-style makeover of the latest VW Beetle is a case of style over substance – it’s based on the regular Beetle Sport. That means it has a 207bhp 2.0-litre TSI petrol engine under its bonnet, driving the front wheels via a six-speed DSG gearbox.

Despite the summery overtones of the Dune, Volkswagen chose the hard-top Beetle as the base vehicle not the 2012 cabriolet.

However, the design tweaks are fairly detailed. Up front, the bonnet has been reshaped and now has a pair of vents cut into it. The bumper now features a large black honeycombed section flanked by semi-circular LED foglights, and an aluminium bash plate that runs under the engine.

At the side, there are 19-inch alloys and the suspension has been raised by 50mm. The plastic cladding that runs around the wheelarches is quite neat with the outer edge of the wheelarch made from matt black plastic and the material closest to the body getting a gloss black finish. It makes the car look more jacked-up than it really is.

VW Beetle Dune sadly not coming to the UK - I reckon it's to best new Beetle I've seen... https://t.co/DJvmmoaggb

The cladding means the Dune is 48mm wider than a standard Beetle, at 1,856mm. The tracks are 29mm wider too, helping the wheels better fill the arches.

At the rear, there’s a specially developed roof spoiler, which doubles as a ski rack. It separates in the middle, allowing the skis to be slid in and secured with a 20mm-wide belt.

The spoiler and roof are painted gloss black, while the rest of the car’s body is painted in a special metallic yellow colour called Arizona. Finishing the exterior is a chunkier rear bumper and set of redesigned tail-lights. 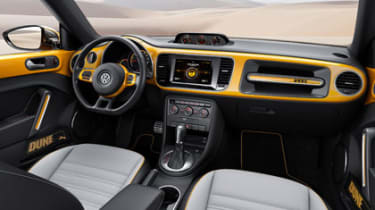 Inside, the Beetle Dune gets more Arizona yellow detailing on the dash and seats. All four seats also benefit from a grey breathable material on the base and seat backs.

The standard car’s upper glovebox is replaced by a grab handle, just like in the original Volkswagen Beetle and the infotainment system is upgraded with a 7.7-inch touchscreen.

This is the second time VW has built a Beetle Dune concept. The first was shown at the LA Motor Show in 2000, and was more far-fetched. It included air suspension and a removable plastic roof panel.

The new version is a more realistic effort in most respects but the new infotainment display does include digital versions of the original concept’s pitch and roll gauges.

The new concept also includes a special app, called Volkswagen Sideways. It allows the driver to use the sat-nav to find where their friends are and navigate to them.

While VW says the rugged-looking Beetle Dune concept is “practically a production vehicle,” a spokesman for the brand confirmed it’s extremely unlikely to ever be sold in the UK.

It could, however, be offered in the US - the biggest market for the Beetle worldwide - if the concept is well received. Given the sub-zero temperatures in Detroit recently, the Beetle Dune’s summery outlook should go down well.