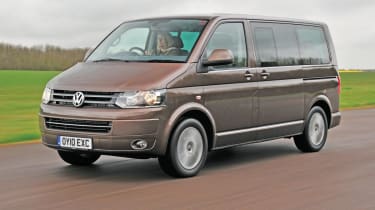 With the Caravelle’s impressive blend of space, solid build quality and a luxury cabin, it is certain to have plenty of admirers. The flexible seating is clever and an array of storage spaces means you’ll never be short of room. However, with prices starting at £31,735, not to mention the additional cost of bringing it up to our car’s spec, some buyers will want to look elsewhere – Hyundai’s i800, for example, starts from £20,595.

Meet VW’s latest entry to the ‘space’ race. This is the new Caravelle, updated with subtle styling tweaks including a revised grille and refreshed headlights.

Access to the huge cabin is via a set of motorised sliding doors, which open to reveal a variety of seating positions thanks to four sliding rails set into the floor. The two individual chairs in the second row slide and can swivel to face backwards. What’s more, there’s a three-person bench in the rear.

A handy central table which folds down and boasts a host of cup-holders and cubbies sits in the centre of the cabin. The highlight of the robust-feeling interior, though, is an updated dashboard featuring chunky switchgear.

Our top-of-the-range Exclusive model was powered by a 138bhp 2.0-litre TDI engine mated to a seven-speed DSG transmission, although a twin-turbo 177bhp unit is also available. With 0-62mph taking 14.7 seconds, off-the-line sprints aren’t a strong point, but on the move the Caravelle has decent punch.

Dynamically the car is safe and composed, yet the steering lacks feedback. And while the optional sports suspension on our flagship helped with cornering, it did make the ride firm. In Exclusive trim and with a selection of extras, our model comes in at just under £40,000, making it an expensive choice. Mercedes’ Viano starts at only £25,430 and offers similar levels of space and practicality.