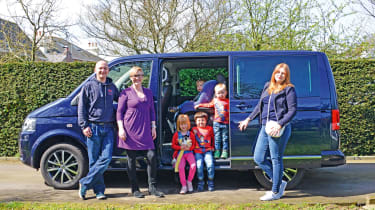 The Caravelle isn’t cheap, but it offers unrivalled space and versatility. It’s also surprisingly good to drive and does an excellent job of hiding its van underpinnings. If you’re looking for the ultimate family runaround, then the big VW should be at the top of your list.

I’ve always said that our fast, refined and practical Golf GTI is the ultimate family car, but even I had to admit that it was going to struggle to accommodate seven people and all their luggage for a week’s holiday on the island of Jersey.

Brilliant though the Golf is, there was no way I could squeeze in me, my wife, our two children, my sister-in-law and two nephews without leaving a pair of disappointed holiday makers on the dockside. Happily, I didn’t have to look far for a temporary replacement, because VW has a number of versatile seven-seaters on its books. And the biggest is the cavernous Caravelle. 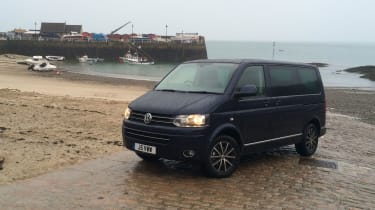 Based on the brand’s legendary Transporter van, this huge MPV is available in short or long-wheelbase guises, and with anything between six and nine seats. Our car was a mid-range Executive model with a seven-seat layout that comprised individual sliding and swivelling ‘captain’s chairs’ for the first two rows, plus a large, sliding three- seater bench at the back.

More importantly, unlike smaller seven-seaters, the Caravelle’s layout doesn’t come at the expense of boot space. Open the huge tailgate and there’s a healthy 775-litre load bay – more than enough for our three suitcases, a pushchair and numerous sets of buckets and spades. 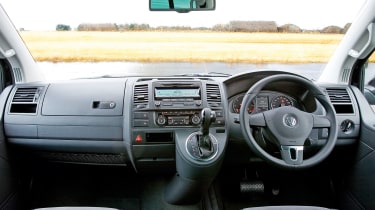 The family friendly features don’t end there, though. For starters, Business models get powered and sliding side doors that are a real boon when you’ve got your hands full with a temperamental toddler. All rear seats have Isofix mounting points, too, while the third row can comfortably accommodate three child seats with room to spare.

Occupants in the rear get bags of space, plus the huge side windows give a panoramic view. And while you’ll have to pay extra for opening glass in the rear doors, the combination of three-zone climate control, tinted rear windows and neat roller blinds helps keep the cabin cool. 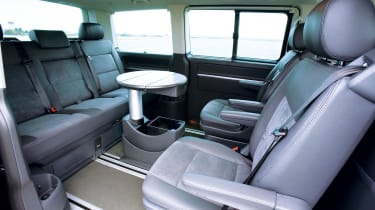 Yet for me, it was the Caravelle driving experience that really impressed. Despite its van underpinnings and sit-up-and-beg driving position, the VW feels very car-like and composed on the road. The punchy 2.0-litre TDI plus slick seven-speed DSG twin-clutch auto box results in surprisingly swift acceleration, while refinement on the run down to the ferry terminal in Poole, Dorset, was first class.

And thanks to its high-set driving position, excellent visibility and boxy dimensions, the Caravelle never felt ponderous on Jersey’s tight and twisty roads. It even returned a decent 35.4mpg, despite spending most of the holiday fully loaded. 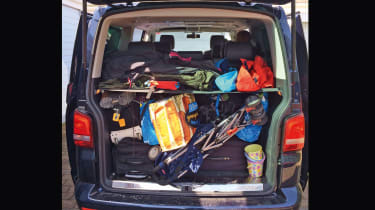 Of course, this versatility isn’t cheap, with our Business model weighing in at over £40,000. But you can spend that on a well specified Sharan – or a Golf GTI for that matter. More importantly, everybody who rode in the Caravelle loved its space and commanding views.

So will I be swapping it for our GTI now that I’m back on the mainland? It’s good, but not that good...