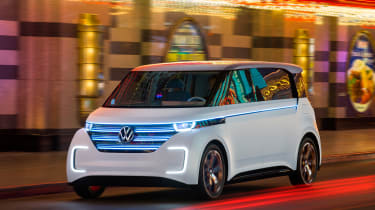 Aside from the positivity that will always come from using a universally recognisable shape that incorporates some of the genes of the beloved Microbus, VW wants to make a serious point about its future with the Budd-e. The fully connected and interactive people mover could be on the road by 2020. With no exhaust emissions, an extended driving range between charges and a futuristic gesture controlled cockpit it says things are looking up for VW.

Volkswagen fans have been on at the company for years to make a modern-day reinvention of the old Microbus, and VW has finally delivered. The Budd-e is more than just a concept - it's a preview of the new MEB electric platform that may soon underpin a new generation of electric Volkswagens. Auto Express has been granted exclusive access behind the wheel.

Away from the excitement of the recent Consumer Electronics Show (CES) in Las Vegas, the silhouette of the Budd-e comes across as especially clean. That’s because the door handles and exterior mirrors have been replaced by electrical solutions.

Simply wave your hand next to the door and it slides open to reveal one of the most advanced interiors around, with a completely button-free digital dash. By swivelling the rotating seats 180 degrees, both the driver and front passenger can interact directly with those in the rear. The impression is more of a lounge than a car. 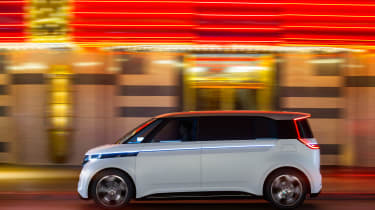 The new Modular Electric Drive Kit (MEB) uses a drivetrain architecture tailored to the use of small electric motors and high-performance batteries mounted flat between the two axles. This set-up has several advantages: a low centre of gravity helps to improve the car’s handling, plus it frees up space in the cabin and the boot.

Press the D-button and step on the right pedal, and the two electric motors (one bolted to each axle) initiate movement – providing a maximum 304bhp. VW claims it’ll do 233 miles on a single charge, too. The availability of torque comes as a pleasant surprise, as the car ushers you along at a decent pace. Plus, the AWD adds an unexpected sporty feel. 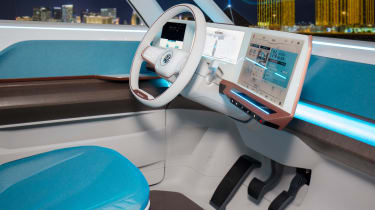 It’s helped by the well contained body roll – courtesy of the battery position, configuration and weight – but a battery this size won’t weigh less than 600kg in a future production vehicle. It’s a great insight into VW’s electric future – with an insider confirming there will be rear, front and all-wheel-drive EVs in years to come.