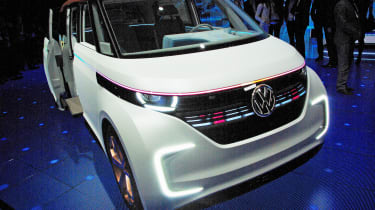 Volkswagen has revealed the Budd-e concept at the 2016 Consumer Electronics Show (CES) in Las Vegas. It's a new all-electric microbus based on the brand's new MEB (modular electric drive kit) platform for electric vehicles.

Despite VW playing down rumours of a van concept ahead of the show, VW boss Herbert Diess pulled the wraps off of the Budd-e (which bears more than a resemblance to the previous concept's name, Bulli) during his keynote speech.

The Budd-e has two electric motors, one at the front and another at the rear, so it's four-wheel drive. There's an all-electric range of 233 miles on a single charge, and it will got from 0-60mph in 6.9 seconds. The MEB platform allows extra space inside thanks to the placement of the motors, as well as new styling possibilities. 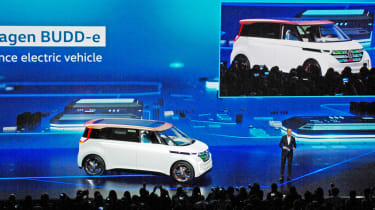 The Budd-e is larger than VW's Touran, but smaller than the Transporter in terms of length - but it's wider than both. Thanks to the side sliding door the opening to get inside is large, but the overall size remains fairly compact.

The front features a large VW badge and a transparent panel that can be backlit by LED lights, and there are a few reminders of the original VW bus with a V-shaped design. The headlights are high and slim, with a colourful LED light strip running down the side of the bus. The Budd-e is similar in design to the previous Bulli concept, with its 'rounded square' silhouette.

The focus for Volkswagen is on the tech inside the concept, with VW describing it as a mobile home - though it clearly has more to offer than the old Volkswagen campers. There's a new car-driver interface, and plenty of connectivity - the car can connect to your home as part of the 'Internet of things'. 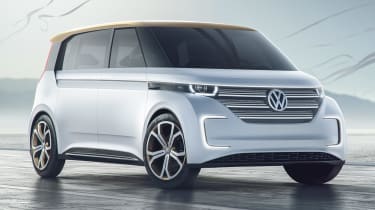 This means that you can control things like lights, heating and even your television from inside the car - ready for when you get home. The driver can use touch and gesture control to control everything, without a button in sight - and even mirrors have been replaced by cameras and screens.

VW says this is the car of 2019 - like the Budd-e it will have a 15-minute charging time, be able to order parts (like tyres) that it knows are needed by itself, see what is in the fridge at home, have full smartphone connectivity, remind drivers of forgotten luggage and have full gesture control available. Plus, the Budd-e will also drive autonomously in VW's hypothetical 2019. 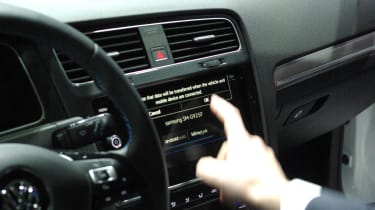 Volkswagen also announced the e-Golf Touch system for the brand's electric hatchback, a new infotainment system using a 9.2-inch touchscreen display. It features a configurable home screen, an improved voice control system and the ability to read and reply to text messages while driving.

There's also electric voice amplification, which makes it easier to talk to those in the back seats, and a future version of the tech will feature cloud integration to transfer settings to other cars. The e-Golf Touch system at CES isn't the production software, but VW says there will only be a few changes for customer cars - and the facelifted e-Golf featuring this tech will be out in 2016 (with more electric range, too).

See more from the Consumer Electronics Show 2016 on our round-up page...