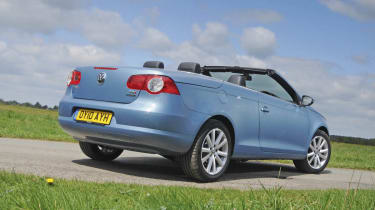 The appeal of VW’s BlueMotion badge is clear. In the diesel Polo and Golf, it brings big savings, with no compromises. This petrol-engined Eos BlueMotion offers relatively low running costs, and you don’t feel like you are driving an eco-minded model. Yet it lacks punch on the motorway and is best suited to urban driving. That wouldn’t be such a problem if it was the only eco Eos in the range, but the 2.0 TDI remains a better choice.

If you’re in the market for a more conventional drop-top than the Himiko we tested here, VW’s stylish Eos is a good bet. And it’s now the first petrol car in the company’s range to get the BlueMotion efficiency tweaks. Does the coupé-cabrio prove that the sky is the limit for VW’s green badge?

The Eos’s 120bhp 1.4-litre TSI turbo engine benefits from some mild updates. In comesa stop-start system, a gearshift light to tell you the best time to change up and regenerative braking, which charges the battery as the car decelerates.

Cruising along B-roads with the top down, it’s business as usual. The engine is refined, and there’s a decent amount of mid-range punch – 0-62mph takes only 10.9 seconds. But as soon as you join a motorway, the car is hampered by its hefty 1,523kg kerbweight and weedy 200Nm torque output.

Still, neither the stop-start nor the regenerative brakes interferes with the driving experience. What’s more, the direct steering and positive gearchanges work together to make the Eos enjoyable – if not exactly thrilling – from behind the wheel.

What benefit do the BlueMotion tweaks offer, though? Well, combined fuel consumption is 46.5mpg, while CO2 emissions of 144g/km mean the newcomer sits in road tax band F. A year’s disc will set you back £125 – or £30 less than for the standard 1.4 TSI it replaces.

This 1.4 TSI SE BlueMotion is also £1,025 cheaper to buy than the regular Eos 2.0-litre diesel, at £21,795. But the latter is not only far quicker – and more capable on the motorway – it also promises stronger economy, returning around 50mpg combined.

While the gutsy TDI engine isn’t as refined as it should be for open-air driving, it remains the best choice for anyone who wants to minimise their fuel bills. For those who will spend more time at low speeds in town, though, the whisper-quiet petrol engine makes the new Eos BlueMotion a more appealing proposition.