Another glimpse at the all-electric Volkswagen ID.4, with teaser images detailing the SUV’s headlights and tail lights 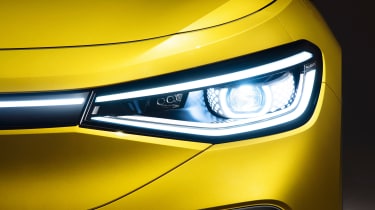 The launch of the pure-electric Volkswagen ID.4 is looming large, and the German brand has offered an official look at the SUV’s LED lighting system ahead of the car’s unveiling on 23 September.

Volkswagen’s new ID.4 SUV is due to go on sale early next year. When it arrives, it’ll provide fresh competition for a growing range of all-electric crossovers, such as the Hyundai Kona Electric, Volvo XC40 P8 Recharge and the forthcoming Tesla Model Y.

As standard, the ID.4 will feature projector LED headlamps – although Volkswagen has confirmed that its Matrix LED headlamps will be available as an optional extra. At the rear, buyers will have the option to specify 3D LED tail lights, which each feature nine fibre-optic cables in place of traditional bulbs and lenses.

The fibre optics are set into a black background, which Volkswagen says makes the light appear to float in space. Scrolling indicators will also be offered and, unlike most rear light clusters, the ID.4’s brake lights will illuminate in the shape of an “X.”

This latest teaser follows our recent glimpse at the ID.4’s cabin. Like the ID.3, the SUV will feature a small digital instrument cluster and an infotainment system mounted on top of the dash. There’s a row of capacitive heating and ventilation controls below the touchscreen, while the door cards are backlit with a 30-colour ambient lighting system.

The dashboard is littered with Piano Black and matte silver trim, while the seats are upholstered in a blend of leatherette and ArtVelours, which is an eco-friendly microfibre material that’s made from 20 per cent recycled plastic bottles. Both front seats also come with pneumatic lumbar support and a massaging function.

ID.4 buyers will also get a light strip along the base of the car’s dashboard, which can notify the driver of incoming phone calls or work in tandem with the sat-nav system, blinking to recommend lane changes. Finally, Volkswagen confirmed that ID.4 will have a boot capacity of 543 litres with the rear seats in their upright position. 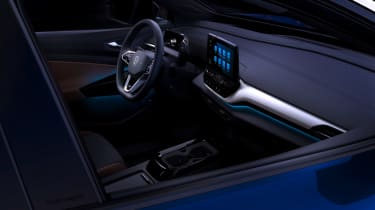 These latest official images, coupled with the recently leaked exterior images, mean we’ve now seen the new Volkswagen ID.4’s styling in its entirety. Our previous updates also covered the ID.4’s exterior design, which looks set to adopt the same cues as the ID.3 hatchback – albeit scaled up to C-segment crossover dimensions.

Up front, there’s a slim pair of LED headlamps which are connected by a lightbar – it will eventually become a common feature across Volkswagen’s ever-expanding “ID” range. Moving rearwards, there’s a full-length panoramic sunroof and, unlike its hatchback sibling, a full width LED tail light bar and a solid steel tailgate rather than a glass panel.

A range of alloy wheel designs have also been confirmed by the images and, so far, we know that two versions – the ID.4 Pro and ID.4 1st Edition – are coming to the UK. The model pictured appears to be the standard version of the ID.4 but Volkswagen bosses have previously suggested that a fastback version of the SUV will also be launched.

Volkswagen has confirmed that the ID.4 will be powered by a 201bhp electric, which will offer a top speed of 99mph. An official WLTP driving range for the production-ready model has not yet been confirmed, although Volkswagen has previously touted that a maximum range of 311 miles should be achievable on a single charge. 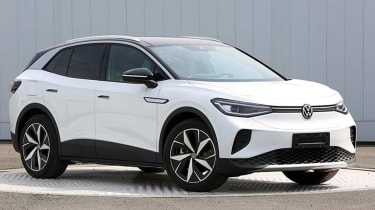 The ID.4 measures 4,592mm long, 1,852mm wide and 1,629mm, while it’s wheelbase stands at 2,765mm – which places it somewhere between the standard Volkswagen Tiguan and the Tiguan Allspace in size.

Volkswagen recently released some official images of the ID.4, although the car in these images was still masked by a camouflage wrap. In the same announcement, the German brand confirmed that its first pure-electric SUV will go on sale later this year in Europe, China and the United States.

From launch, we’re expecting the ID.4 to be front-wheel-drive only. But, long before the car’s official unveiling, Volkswagen offered a preview of the model with the ID. Crozz concept. The show car featured a pair of electric motors, which provided a power output of 302bhp and a top speed of 112mph – and this could form the basis of the upcoming all-wheel-drive ID.4.

Volkswagen’s MEB platform can also accommodate battery packs ranging between 45kWh and 77kWh in size, which theoretically translates to between roughly 200 and 300 miles of range.

Check out our gallery of the best electric cars to buy now below... 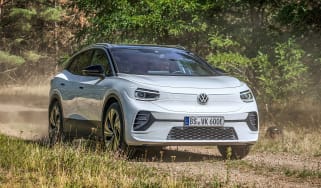 We drive the new Volkswagen ID.4 prototype to get a taste for VW's all-electric SUV