The UK no longer gets the Volkswagen Jetta, but the compact saloon will go on sale in the United States from Q2 2018 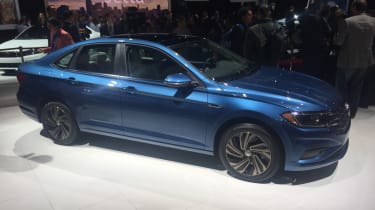 The UK said farewell to the Volkswagen Jetta in 2017, but VW’s compact saloon is still on sale in the United States and now an all-new seventh-generation car has been revealed at the 2018 Detroit Motor Show.

It will be introduced into the US market in the second quarter of this year and will be assembled on the VW Group’s MQB platform, which it shares with the Golf and Arteon. Only one engine has been announced for the new Jetta so far, a 1.4-litre turbocharged petrol unit that produces 148bhp and 250Nm of torque. It’s mated to a six-speed manual as standard but an eight-speed automatic transmission can be specified.

Standard kit on the US-spec Jetta includes front collision assist and blind spot monitor. It’s also one of the first Volkswagens to incorporate a digital instrument cluster measuring 10.2 inches wide, plus it features a 400-watt sound system courtesy of Beats by Dre on higher spec versions. 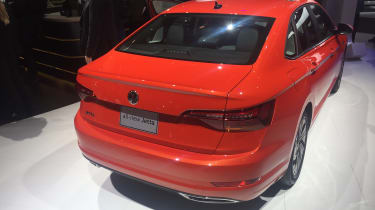 There are a total of four trim levels with the range kicking off in S trim and topping out with SEL Premium. The latter can be equipped with a raft of the safety features, which includes adaptive cruise control, rear traffic alert and an automatic post-collision braking system. LED headlights are standard on all Jettas while a panoramic sunroof is standard on all trim levels bar S.

The body has been stretched by 43mm and the wheelbase has also been lengthened by 35mm compared to the outgoing Mk6 Jetta, resulting in more space for passengers inside. With a drag coefficient of 0.27Cd, it’s also claimed to be more aerodynamically efficient, therefore reducing fuel consumption and CO2 emissions.

Should the new VW Jetta go on sale in the UK? Let us know below...