If you need reminding that we live in strange times, take a moment to look at the Polo Dune. 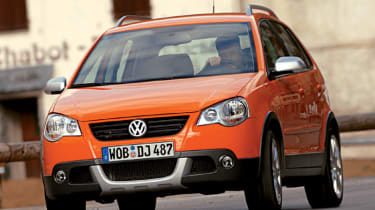 Ultimately, the Polo Dune is a tricky car to judge. It drives well and is bright enough to put a smile on your face. Yet there is something a little dishonest about the whole design which stops us from falling for the 4x4. If you want to drive a Polo with a kick, give the Dune a wide berth and try the 1.4-litre Sport instead.

If you need reminding that we live in strange times, take a moment to look at the Polo Dune. It's a car with the visual punch of a capable 4x4, yet has the off-roading ability of a skateboard.

The basic concept is nothing new, as VW already sells a Dune in small numbers here. Yet even though the 4x4 Polo has yet to make it to the top of the sales charts, the firm promises that this new Dune is very different.

So let's not dwell on the soundness of the basic idea - what is the second-generation Polo Dune like? Well, as with the first version, it certainly grabs attention with its wild looks. Wide, 17-inch alloys pack the wheelarches, while a chunky bodykit surrounds the lower half of the car.

The newcomer retains its concept-car style and, during our time in the snowy French Alps, it actually looked quite at home. What effect it will have on passers-by in a Tesco car park, how- ever, is another matter!

Two engines are on offer: a 75bhp four-cylinder 1.4-litre petrol unit and a 70bhp three-cylinder 1.4 TDI. We drove the former and in most conditions, it proved lively and remarkably smooth, despite its lowly performance. Only on steep inclines did it really start to feel underpowered. Opt for the diesel if you're planning to carry more than one passenger on a regular basis. To raise the ride height, the Dune is fitted with what VW calls its 'inclement weather kit.' This is basically a package of parts which are fitted to standard Polos heading for countries where the roads are particularly bad. The main components are longer springs which raise the body by 15mm. Bigger wheels and roof rails add an extra 55mm.

Yet despite being what can only be described as a parts-bin special, the Polo Dune is surprisingly fun to drive. The higher centre of gravity doesn't affect its behaviour through corners and, unless you're really throwing the car around, it can be threaded through S-bends easily. As on the standard car, ride quality is first class.

The electric steering system isn't the best, however, and although the accuracy is fine, it feels artificial and lifeless most of the time. More feedback and a better natural response would help.

Even so, there's no escaping the fact that the Polo Dune is something of a fake. Despite the four-wheel-drive transmission, its off-road capability is as limited as its appeal.