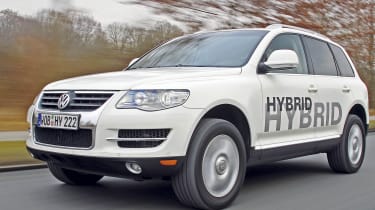 It's Volkswagen’s most powerful planet-saver yet! This all-new Touareg Hybrid SUV has been confirmed for production.

However, it doesn’t look too eco-friendly on the face of it, as most of the power comes from the 3.0-litre supercharged TSI V6 also found in Audi’s S4. That means 328bhp and 440Nm during normal driving.

The big green news, though, is the rear-mounted electric motor, as it can power the car independently at low speeds. It boosts the V6 in short bursts at the top end, too, taking power to 369bhp, torque to 550Nm and giving 0-62mph in 6.8 seconds.

Regenerative braking recovers lost energy and transfers it to the electric motor for re-use at low speed. Together, the eco kit is claimed to bring fuel savings of 25 per cent in city driving and 17 per cent combined.

The Touareg Hybrid won’t see production until next year. But while it’s not as green and clean as the firm’s Polo BlueMotion supermini, it’s certainly easier on the conscience than most 4x4s.

Rival: Lexus RX400h Swish, fashionable and practical, the Lexus has been a winner with the 4x4 brigade. But it’s been around for a while now and looks a little long in the tooth – so the fresh-faced Touareg will be a force to be reckoned with next year.