Best ever S4 arrives with a supercharged V6 and seven-speed gearbox. 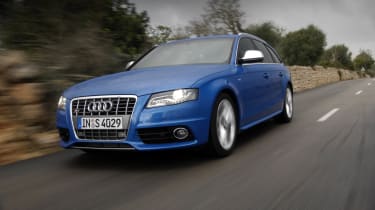 The S4 has always been a subtle yet extremely rapid performance car, and the new model is no different. Thanks to the responsive supercharged V6, sophisticated seven-speed auto and confidence-inspiring chassis, it really does have an even deeper reserve of talents than ever. The Sport differential is a must, though – it makes the car come alive. As an all-round package, the new S4 really has managed to tick most of the boxes, and in practical Avant form it’s particularly appealing.

This is an S express with a difference. It has been 76 years since Audi last used a supercharged engine in one of its cars. Instead, it has favoured compact turbos for some its most famous sporting models, including the legendary Quattro coupé.

But the blower is back in fashion at Audi, and there’s one under the bonnet of the latest S4. The new 328bhp 3.0-litre V6 is smaller and slightly less powerful than the 339bhp 4.2-litre V8 of the previous S4, but more importantly, it packs more torque – another 30Nm at 440Nm. And with 90 per cent of that thrust available from 2,200rpm, it promises to be a responsive drive. On paper, the figures are certainly impressive, with a 0-60mph time of 5.4 seconds and a top speed limited to 155mph. Thanks to the engine’s smaller capacity, there are improvements in efficiency, too, so the new S4 returns 29.4mpg combined and emits 224g/km of CO2.

Once on the road, all thoughts of economy vanish as you explore the engine’s power. The quad exhaust pipes emit a pleasing growl as the rev counter sweeps around the dial, and that torque really makes itself known – no matter what gear you’re in. Only a faint whine from the supercharger reminds you how it manages this feat.

But this car is about so much more than just a big engine. For a start, the S4 is available with Audi’s new seven-speed S tronic dual clutch transmission, which debuted on the Q5 compact SUV (see Issue 1,025), as well as a bespoke six-speed manual. The company expects the former to be the biggest seller in the UK, and we can see why. Full throttle upshifts are executed quickly, while the downshifts are accompanied by a pleasing blip of the throttle to smooth out the changes. Steering wheel-mounted paddleshifters complete the set-up.

Of course, no performance Audi would be the same without a quattro four-wheel-drive system, and the S4’s is biased 40:60 front to rear. Also available as an option is Audi’s sport differential – part of the new Drive Select Adaptive Dynamics system. This varies the torque across the rear axle, so that the outer tyre can be supplied with more power to help push the car through a corner, giving better stability.

While the standard A4 is a handsome car, the flagship adds some trademark S-style muscle. There are aluminium-look mirror housings, 18-inch alloys, two pairs of chrome exhaust tips and subtle badging. Overall it looks purposeful, but restrained, particularly in Avant estate form driven here, although it may not be aggressive enough for some buyers.

The interior boasts supportive but comfortable bucket seats, a multifunction sports steering wheel, aluminium dash trim and S4 logos throughout. Optional extras include Audi parking assist, lane change assistant and a powerful Bang and Olufsen stereo. It all adds up to an extremely impressive package.