Will quality revisions be enough to give VW Touareg R-Line an edge? 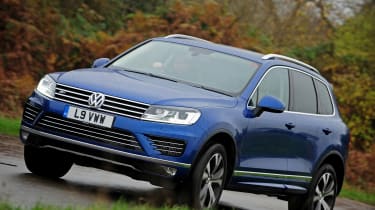 Styling revisions add a bit of sparkle to the tough and dependable VW Touareg. Our choice would be the more powerful diesel as it provides better performance with near-identical running costs to the less powerful version. But while there’s no doubting the fact the Touareg is exquisite in its own right, when compared to rivals, it feels a little long in the tooth.

It may not seem like it, but Volkswagen has been building its Touareg SUV for 12 years now. A second-generation model arrived in 2010 but it only notched up just under 3,000 sales last year, so its been treated to raft of revisions to keep it on buyers’ consideration lists.

In the UK, Volkswagen expects the top-spec R-Line version to snatch 85 per cent of Touareg sales, so that’s the one we’re focusing on. In fact, it’s the best example to show off the revisions, because while all 2015 Touaregs get revised bumpers and grilles, new wheels and paint colours, it’s the R-Line that makes the boldest statement. 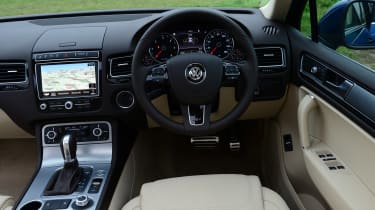 The days of the Touareg being offered with V6 and V8 petrols, a hybrid and even a V10 diesel are long gone. Opt for a Touareg today and you’ll have the choice of a 3.0-litre V6 diesel in two flavours – 201bhp and 258bhp. We tested the latter and thanks to a strong 580Nm of torque, the Touareg rockets to 62mph in a hot hatch-rivaling 7.2 seconds – all backed up by a throaty V6 soundtrack.

The top speed is 140mph, while stop-start and a coasting function on the eight-speed dual-clutch gearbox helps the big VW return 42.8mpg and emit 174g/km of CO2 – just 1g/km more than the lower-powered version, which also returns the same fuel economy. 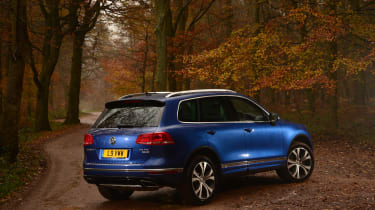 The well-weighted and accurate steering make threading the Touareg along country roads a breeze, but the while some rivals seem to shrink around the driver, the VW always seems large and heavy. The 20-inch wheels enjoy crashing through pot holes too, but on better surfaces, the ride is floaty.

On the plus side, the Touareg feels built to last - a feeling that is backed up inside with the sturdy but conventional interior. The makeover adds a little bit of sparkle to the Touareg’s twilight days, but whether it’s enough to keep the car appealing to the UK buyers remains to be seen.