Next Volkswagen Touran will be up to 19 per cent more economical, sharing its platform with Golf and SEAT Leon

The updated Volkswagen Touran has been shown at the Geneva Motor Show 2015, following its reveal last week. The mid-size MPV will use the VW Golf’s MQB platform for the first time, and is said to be up to 19 per cent more economical than the outgoing car.

Having sold more than 1.9 million units worldwide since going on sale in 2003, the Touran is an extremely important car for VW. Transferring the popular MPV to Volkswagen’s highly versatile MQB platform has allowed designers to make the car 130mm longer and even more spacious inside. The new car manages 48 litres more boot space, yet is 62kg lighter overall. 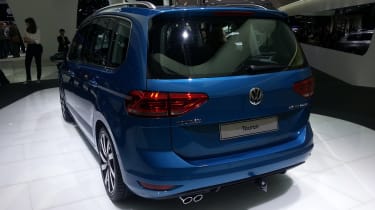 Visual changes are slight, with Volkswagen favouring evolution rather than revolution. VW head designer, Klaus Bischoff, said: “We refined the design concept, reinventing it in places to give it a sharper look while retaining a strong underlying continuity. What emerges is an original with a much enhanced light and sporty look thanks to the long side windows and precise lines.”

At the front, the new Touran gets a bold three-bar grille and sleeker redesigned headlamps. Top-spec cars will ditch the old models xenons in favour of all-new LED units for a smoother design and better night time visibility. The refreshed Touran also boasts restyled foglamps and a sharper front bumper, while down the side an aggressive slice breaks up the boxy dimensions. At the rear it gets Golf-inspired LED tail lights and further creases that give this MPV a sportier and more dynamic stance. 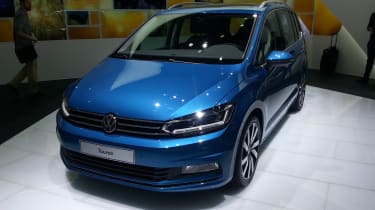 Inside, it lifts its motion-sensitive touchscreen straight from the new Golf and Passat, with flashes of leather and high-quality plastics dotted around the cabin. The new Touran will use a modular infotainment system with screen sizes ranging from five to eight inches, with the range-topping systems available with an optional Dynaudio sound system. VW will also offer Mirrorlink capability with Apple CarPlay and Android Auto for the first time. 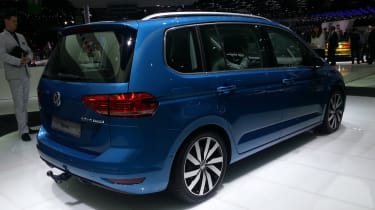 Safety is another priority, with the new Touran said to be 25 per cent stiffer than before. It’s available with up to nine airbags, as well as various kit such as automatic post-collision braking, adaptive cruise control and driver fatigue alert. Side and rear traffic assist for help when manoeuvring, as well as park assist and pre-crash proactive occupant protection are also on the options list – or standard on higher spec cars. 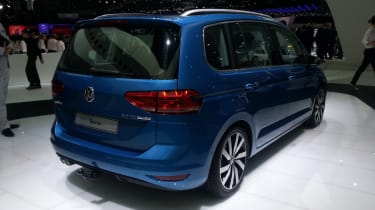 UK buyers will get a choice of two petrol and three diesel engines. These comprise 108bhp 1.2 and 148bhp 1.4-litre TSI petrols, as well as a 108bhp 1.6 TDI diesel. There will also be a pair of 2.0-litre TDIs – in 148bhp and 187bhp guises. All cars will come with a choice of manual or automatic transmissions, apart from the top-spec 187bhp diesel, which gets DSG as standard.

The most economical Touran will be the 1.6 TDI DSG, capable of returning 68.9mpg, while the most frugal petrol – the 1.4 TSI – will do 52.3mpg. All models feature stop-start and brake energy recuperation technology as standard.

Of course, practicality remains a Touran strong point, with a newly developed fold-flat seating system featuring in the MPV for the first time. VW says the second row of seats is now much lighter and can now be folded to merge flat with the floor. 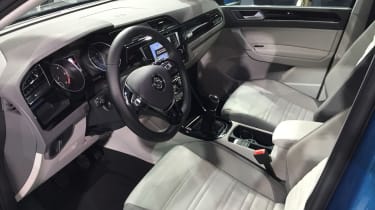 This means even with five people on board the new Touran offers an impressive 1,040 litres of luggage space with the middle row in place. VW also claims a total of 47 different storage compartments distributed around the interior, cementing its place as an extremely functional MPV.

It’ll arrive in the UK in November. Prices haven’t been announced yet, but due to the cost-cutting MQB platform, VW bosses don't expect the new car to cost any more than the outgoing model, which currently starts from £19,790. We expect a top-spec SE-L 2.0-litre TDI to set you back around £29,000.

Now read about all the cars at the 2015 Geneva Motor Show.