Polestar 1 hybrid to arrive in 2019, but the UK market will have to make do with left-hand drive

Polestar confirmed prices for its first standalone model - the Polestar 1 - at the 2018 Beijing Motor Show. The high-performance coupe is being built at a new facility in China, and while it will be available in the UK as well as China, North America and seven other countries accross Europe, it will only come in left-hand drive. Bought outright, the Polestar 1 will be priced from €155,000 (£135,500), though it will be offered through a subscription service too.

Along with the production-ready coupe, Polestar has two further, all-electric products confirmed and in the pipeline: a Polestar 2 saloon to rival the Tesla Model 3 that we'll see at the 2019 Geneva Motor Show, and a larger Polestar 3 coupe SUV. The '2' and '3' will be pure EVs too with Jonathan Goodman, Polestar's chief operating officer, saying; "The only hybrid Polestar you’ll ever see is this one, every car that comes after will be a pure EV."

The Polestar 1 is being touted as an “Electric Performance Hybrid”, and will make use of a 338bhp 2.0-litre four-cylinder petrol engine sending drive to the front wheels. A starter motor generator will inject a further 39bhp, and electric motors will send 215bhp to the rear axle. That means total power reaches 592bhp, with torque hitting 1,000Nm. The Polestar 1 will be capable of 0-60mph in under 4 seconds. 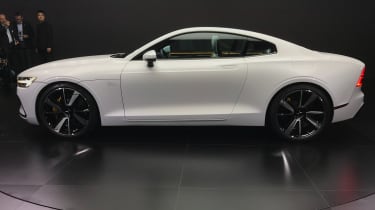 Polestar claims that the car can run on the rear electric motor and integrated starter motor only, and this provides a claimed all-electric range of 93 miles.

As well as the high-performance hybrid powertrain, the Swedish firm has kitted out the Polestar 1 with driver-configurable active suspension from specialist Ohlins. Polestar claims the system can react to changes in the road surface in less than two milliseconds. Large brakes with six-piston calipers from Akebono provide stopping power, while the planetary gearbox driving the rear axle doubles as a torque-vectoring unit.

The Polestar 1 takes the design language of the S90 saloon and morphs it into a smooth 2+2 coupe format. But at 4,500mm in length, it’s shorter than the S90, and also has a 320mm shorter wheelbase than the saloon. 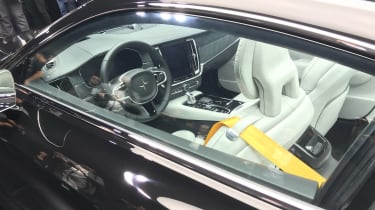 At the front end, Volvo’s signature grille is flanked by ‘Thor’s Hammer’ LED headlights, while the side of the car is uncluttered, sporting clean lines. C-shaped tail-lamps inject a little flair into the squared-off rear end, complete with Polestar badging.

• Polestar 2 to arrive as right-hand drive EV, with Polestar 3 to follow

Extensive use of carbon fibre in the body panels saves 230kg compared with a steel construction. The company says it intends to build 600 Polestar 1s a year, and the cars will be available to be bought outright or through a new subscription service, similar to that being offered by Volvo on the new XC40. 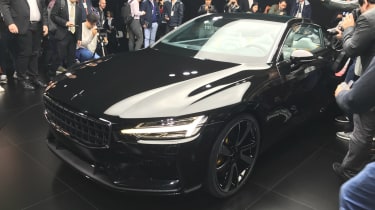 One monthly payment covers insurance and maintenance, and will also provide customers with on-demand services for short-term access to other vehicles. Polestar envisages subscriptions lasting for two or three years, at the end of which the car will be replaced with a new one. The old vehicle is then refurbished and offered via subscription as a second-hand model.

Polestar remains a subsidiary of Volvo, which has ploughed £577m into the firm, alongside two investment companies housed within parent corporation Geely Holdings. The connection between the two brands will remain in the future with Polestar asisting with the development of a range of performance focused 'Polestar Engineered' models that will sit within the Volvo car range and the Volvo aftersales network taking care of Polestar customers' servicing and repair requirements.

Polestar's models will be kept away from traditional Volvo dealerships, however, retailed both online and through a series of 'Polestar Spaces'. "I don’t believe you can just be an online brand", said Goodman. "We’ll have a network of what we call Polestar Spaces but they’ll be smaller, in town centres, 250m3, with non-commission sales people so the customer can come in and rediscover the joy of finding out about a car without someone saying ‘i need you to sign, i need you to sign.'”

In the fullness of time we could also see a more performance-orientated Polestar 1 with the sleek, unassuming lines replaced by a more aggressive look that better reflects the performance contained within the car's hybrid powertrain. "We will always have a halo performance car as part of the range going forward. So as we unveil things you’ll see some very interesting concepts coming from us and very interesting future models. All i’ll say is watch this space", said Goodman.

With three Polestar models in the pipeline, read how the former sub-brand separated from Volvo...