Launch prices for the the new all-electric Polestar 2 have been confirmed in Europe, with British buyers to be charged £49,900 for the highly specced launch ediiton of the Tesla Model 3 rival, with first deliveries in June 2020. Buyers can still lodge a £1,000 deposit to secure a car.

Additional, cheaper variants are expected in due course. But the first cars to roll off the production line early in 2020 will come equipped with both the Pilot and Plus packages as standard, introducing a full suite of driver assistance features including semi-autonomous Pilot Assist, adaptive cruise control, lane keeping assistance, a 360-degree top down camera and luxuries such as a full length glass panoramic roof, heated steering wheel, front and rear seats, and a Harman Kardon premium sound system.

Optional is the Performance Pack, consisting of uprated Ohlins dampers, 20-inch alloy wheels, high-performance Brembo brakes, and gold highlights for the valve caps on the outside and the seatbelts inside. 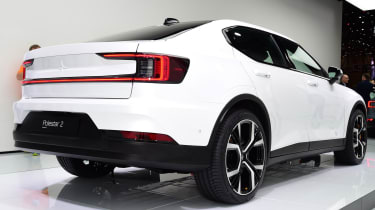 The Polestar 2 is a five-door fastback saloon built on Volvo’s new all-electric CMA platform. Powered by two electric motors, it produces a combined output of 402bhp and 660Nm of torque, which results in a 0–62mph sprint of around 4.7 seconds. The motors are paired with a 78kWh battery pack, with Polestar targeting a WLTP-certified range of 311 miles.

Inside, the standard Polestar 2 gets the brand’s signature yellow seat belts, along with a minimalist dashboard, leather upholstery, a digital instrument binnacle, a multi-function steering wheel and an 11-inch infotainment system powered by Android.

Other features include LED headlights, frameless wing mirrors and proximity lighting, which illuminates the car’s panoramic glass roof with the Polestar logo upon the driver’s approach. Polestar’s “phone-as-key” technology will also feature as standard, removing the need for a physical key and automatically configuring the interior to the driver’s preference when it detects their proximity.

Buyers will be given access to Polestar’s public charging network, which piggybacks off the UK's expanding infrastructure. Directions to the car's nearest charging location will be accessible via the car’s infotainment system or the driver’s smartphone. For added convenience, the digital instrument binnacle also displays the Polestar 2’s remaining charge when the car is parked.

Following the car's online reveal, Polestar CEO Thomas Ingenlath confirmed that the Polestar 2 would be made available with more than one battery size when it reaches the UK market in 2020, with an affordable short-range model and a range-topping long-range model being the likely options.

The new Polestar 2 will eventually be joined by the Polestar 3 coupe-SUV, which would give the brand models to compete against both Tesla’s Model 3 and Model X. Despite this, Ingenlath was keen to play down any plans to usurp Tesla. “We are not saying it’s a Tesla killer, we are here to vividly compete with them in the market.”

At a later date, Volvo’s electrified performance arm will offer an entry-level model, too, slated to start from around £35,500.

What are your thoughts on the new Polestar 2? Let us know in the comments section below…

Welcome to our Geneva Motor Show hub page, scroll down for all our Geneva content...
New Polestar 2 2020 review