Volvo Concept 26 turns your car into a lounge

With self-driving cars on the way, the Volvo's Concept 26 aims to make your commute more relaxing 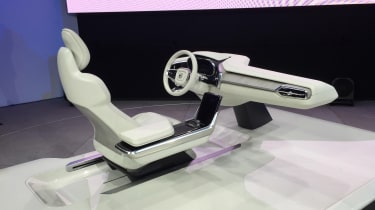 It's no secret that manufacturers are making leaps and bounds into the world of autonomous driving. Google has been developing driverless software for years, and Tesla recently unveiled its 'Autopilot' feature. Volvo is looking towards the future too, and its Concept 26 deals with the big question – just what are you supposed to do with yourself while your car's doing the driving?

Autonomous driving systems still require a degree of involvement at the moment, but in the future, when they're allowed to take full control of the car, Volvo anticipate bored drivers with nothing to do. Concept 26 is based around an all-new seat design, which Volvo says will cradle the driver as the dash transforms into one of three modes – Drive, Play, or Relax.

Drive is self-explanatory, but in Play or Relax mode the steering wheel retracts, the seat reclines and a large display emerges from the dashboard. This enables people to use their commuting time creatively – either working, or relaxing by watching online media or listening to music.

It sounds like a fantasy now, but the technology involved is advancing very quickly, and its entirely possible that we may see something like this in our lifetimes. Volvo has always been at the forefront of safety tech, too, so it will doubtless invest heavily in research to prove its autonomous software safe before release. We'd expect no less from the company that's promised none of their customers will be killed in a new car from 2020.

It's in Volvo's best interests, too, as the company's stance is that liability rests with the manufacturer in the event of an autonomous driving failure. Senior Vice President of R&D at Volvo Peter Mertens said: "We firmly believe that car makers should take full responsibility for the actions of the car when it is driving in full autonomous mode. If a manufacturer does not accept liability it clearly implies that they are not confident about their autonomous drive technology."

Would you let your car do the driving while you relax? Let us know below...