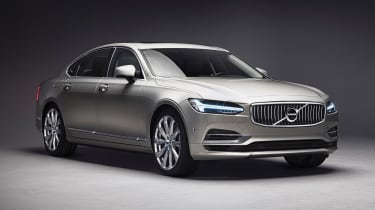 This is the Volvo S90 Ambience concept. Revealed ahead of its debut at the Beijing Motor Show, the concept uses visuals, sounds and scents inside the car to build on the idea of luxury.

The concept is based on a top-spec, three-seat version of the S90 saloon, which is sold in China. It does away with the front passenger seat to create more space for those travelling in the back.

It’s controlled through a smartphone app, which allows those inside to select the ‘visual’ element Volvo has worked on. Themes such as the Scandinavian Forest, Northern Lights or Rain are projected onto the headlining of the car.

Depending on which scene has been chosen, the car then matches it with a one of four specific scents, which are automatically pumped in the cabin.

An uprated Bowers & Wilkins sound system has also been fitted and features additional tweeters in the headrests.

Although just a study for now, Volvo does have plans to launch the Ambience concept as an optional package on Excellence models in China. The country is quickly becoming one the Swedish brands biggest new car markets; over 100,000 model were sold in the region last year.

Read all about the Volvo S90 Excellence sold in China…