Base diesel estate benefits from eco makeover – and £35 road tax. 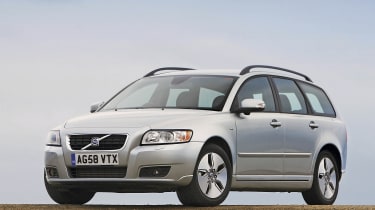 A Volvo estate in the same £35 Band B tax bracket as the most fuel-efficient superminis? It sounds fanciful, but that’s exactly what the Swedish firm is offering with this V50.

It’s one of a range of Volvos – badged DRIVe – that goes on sale next year. The line-up also includes the S40 saloon and C30 hatch.

The V50 has been designed to return 62.8mpg and emit a tax-friendly 118g/km of CO2 – about the same as a diesel Fiat 500. And yet it still offers the safety, style and versatility of a traditional Volvo estate.

If you want to buy the V50 with a 1.6-litre diesel, you can only get it in DRIVe spec. It has drag-reducing alloys and low-rolling-resistance tyres, plus a front spoiler borrowed from the sporty T5. There’s also a revised radiator grille to improve airflow around the car. The newcomer looks slinky, and the suspension is 10mm lower to help it slip through the air more easily.

Economy The engine management system has been updated to enhance economy over performance, and the gearbox gets longer ratios. In addition, a dash indicator tells you the optimum time to change gear.

This takes into account road conditions, such as slopes, and if you follow its lead, you never feel as if you’re shifting too early. Nor do you get the sensation that you’re driving a car which is biased towards economy. However, the diesel engine is a bit clattery, and the chassis changes have done nothing to improve the V50’s harsh ride or lifeless steering.

The firm’s aim was to give buyers all the benefits of a low-emission car but without the compromises, and refinement aside, it has met its goal.

We can’t help feeling that Volvo could have achieved even more by fitting its DRIVe models with a stop-start system to cut emissions and consumption further. But the company has still managed to create a sub-120g/km premium compact estate before anyone else.

Rival: Passat Bluemotion Well built Volkswagen estate is a larger and more versatile load carrier than the Volvo. But with a figure of 129g/km, it can’t match the V50 DRIVe for CO2 emissions, plus it lags behind in terms of economy.