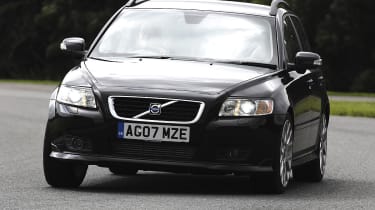 Tweaks to the V50 line-up strengthen the engine range and broaden its appeal. The punchy D5 diesel is a welcome addition that provides solid performance and economy. But while the Volvo looks smart and is a capable all-rounder, it’s pricey, especially in top SE Sport spec.

Sporty, stylish and practical – the new Volvo V50 is as versatile as a Swiss army knife. But can it cut through the competition on UK roads?

The Swedish brand has revised its smallest estate range with the addition of two new engines. Along­side a fresh entry-level 2.0-litre petrol unit, there’s now the option of the potent D5 diesel powerplant for the first time.

Cosmetic revisions are limited, and only true Volvo fans will spot the wider grille, plus the revamped light covers and bumper at the front. It’s much the same story at the back, where new lamp clusters featuring LED bulbs are the only obvious difference.

None of this is bad news, though, because the V50 has always been a handsome estate. Unfortunately, it’s never been a particularly big one – and, disappointingly, the modest 417-litre boot capacity is the same as on the previous model. At least it expands to a more useful 1,307 litres with the rear seats folded down.

Opt for the SE Sport trim of the car we drove, and you get large 18-inch wheels and a full bodykit to help set your V50 apart from lesser variants. The cabin also features leather upholstery and some of the most comfortable seats on the market.

Inside, storage is improved, thanks to large door bins, while solid build qual­ity and superior materials reinforce the V50’s premium feel.

Our test car also had the advanced Blind Spot Information System (BLIS). At £650 it’s not cheap, but the clever set-up alerts the driver to objects in the over-the-shoulder blind spot.

Rear-facing digital cameras mounted in the door mirrors monitor the areas where your vision is restricted, and flash warning lights positioned on the A-pillars if it’s unsafe to change lanes. The same system is available in the XC90, and although it takes some getting used to, it eases some of the strain of motorway driving.

In comparison, the D5 engine is a familiar piece of technology that has been tried and tested in cars across the Volvo model range. The power output has been reduced for the V50, although it still produces 178bhp and 350Nm of torque – which is enough to propel the revised load-lugger from 0-62mph in 7.9 seconds.

Thanks largely to its five-cylinder configuration, the oil-burner also has a distinctive growl – but under full throttle the noise is all too noticeable. Once cruising, refinement improves, making the Volvo a relaxed motorway cruiser.

Sport models like ours come fitted with a chassis package designed to improve handling – although as the V50 shares underpinnings with the Ford Focus, it’s stable and sure-footed anyway. Unfortunately, the steering feels a little numb. Still, the Volvo is composed in bends, and despite its large 18-inch alloy wheels, the V50’s ride is impressive. Combine this with the brand’s smooth Geartronic automatic transmission, and the estate is a soothing car to drive.

Although lower-spec variants argu-ably make more sense than the top-of-the-range SE Sport, the revised V50 is a desirable family car. Overall, it’s a solid alternative to contenders from the likes of Honda, Saab and BMW.

But it’s not cheap. If you want your Volvo with as much equipment as the option-laden model here, you will have to spend £30,240! It’s not difficult to find cheaper alternatives with more tempting prices.

Rival: BMW 3-Series Touring Compact executive models don’t come much better than BMW’s class-leading 3-Series Touring. It’s great to drive, has plenty of room inside and is refined. What’s more, it’s available with some of the best diesel engines money can buy.